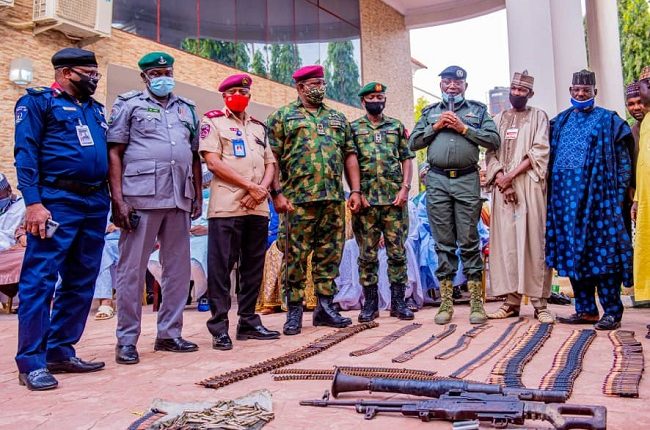 Speaking while handing over the weapons to Governor Matawalle on Thursday evening, Zakwi with two of his colleagues said they were convinced to surrender with the way other repentant bandits were handled by the State Government.

“We finally resolved to surrender and join the society for normal living and peace to reign as a result of reconciliation and dialogue.”

The son who inherited the leadership of one of the most dangerous camps in the state (Buharin Daji Camp), from his late father has sworn that, henceforth, he will live peacefully and enjoy citizenship in the state.

“I swear in the name of the holy Almighty God, that I will never either kill, kidnap or disturb the peace of innocent citizens of Zamfara State and even beyond again. I want to live as a law-abiding and peace-loving citizen.

“I want to assure the innocent people of Zamfara State that, a large number of bandits still living in the forest are willing to embrace peace as we were all made to understand that, administration of Governor Matawalle does not mean to trap and harm us, but rather meant to restore peace in the state.”

Responding, Governor Bello Muhammad Matawalle assured the repentant bandits of equal treatment without being stigmatized by any person or group of persons.

“My administration was committed to providing conducive living standard such as better education, health care delivery among other things.”