JUST IN: Panic as plane skids off runway at Lagos Airport 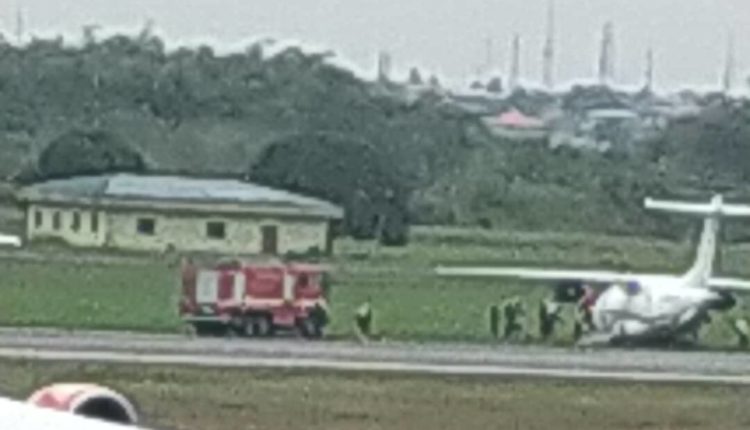 Facts just emerged on how an aircraft belonging to the Kaduna-based Dornier AIEP Airline skidded off the runway at the Murtala Muhammed International Airport, Lagos on Sunday evening.

Confirming the incident to Tribune Online, the spokesperson for AIB said accident investigators from the Bureau had visited the scene of the accident.

At about 25 minutes, the train slowed down at the uncompleted Omi-Adio terminal, a village on the Abeokuta/Ibadan expressway; it’s a stone throw from Apata in Ibadan. Conveyance of passengers from there and other terminals has not kickstarted as the terminals are still under construction and workers were found there…JUST IN: Panic as plane skids off runway at Lagos Airport

“Please do not talk to my father. He is yet to come to terms with the death of his son. It is a most tragic experience. How does one quantify the loss of a dear brother? My brother was killed like an animal by two herdsmen. His offence was that he asked them to drive their cows off his already cultivated farmland,” Bisi Olaosepin, whose brother was hacked to death, struggled to hold back his tears as he relayed to Sunday Tribune the horrible experience that culminated in the passage of his brother…JUST IN: Panic as plane skids off runway at Lagos Airport