JUST IN: FBI launches manhunt for individuals behind violence at Capitol Building 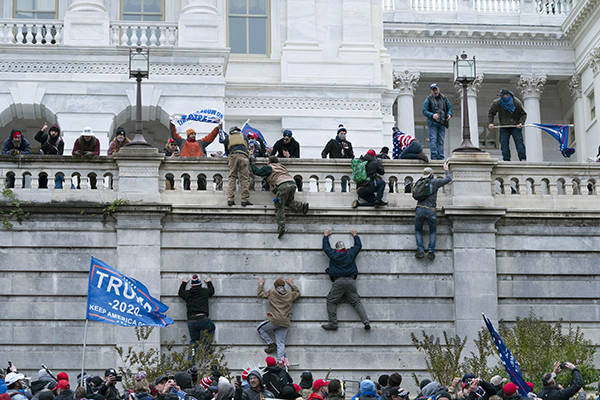 The United States Federal Bureau of Investigation (FBI) on Thursday announced that it is seeking to identify individuals behind instigating violence in and around the Capitol Building which took place on Wednesday, January 6.

The Capitol Building, the seat of the US Congress, was attacked when hundreds of supporters of President Donald Trump pushed through barriers set up along the perimeter of the Capitol, where they tussled with officers in full riot gear.

An armed standoff took place at the House front door at about 3 p.m. ET, and police officers had their guns drawn at someone who was trying to breach it.

However, the FBI, on Thursday, announced in a statement that it is now seeking information that will assist in identifying individuals who are actively instigating violence in Washington.

The FBI also said it is accepting tips and digital media depicting rioting and violence in the Capitol Building and surrounding area in Washington to aid it in its investigation.

The FBI added in its statement that it is urging those who witnessed the incident to submit any information, photos, or videos that could be relevant for its investigation to a site designed for that purpose, fbi.gov/USCapitol.

According to the FBI statement entitled “FBI Seeking Information Related to Violent Activity at the US Capitol Building: The FBI is seeking information that will assist in identifying individuals who are actively instigating violence in Washington DC.

“The FBI is accepting tips and digital media depicting rioting and violence in the U.S. Capitol Building and surrounding area in Washington DC, on January 6, 2021.

“If you have witnessed unlawful violent actions, we urge you to submit any information, photos, or videos that could be relevant at fbi.gov/USCapitol.

“Please use this form to submit any images, videos, or other multimedia files you have related to possible violations of federal law committed. Our goal is to preserve the public’s constitutional right to protest by protecting everyone from violence and other criminal activity.

“If you do not have an attachment but have information to provide, please submit it at tips.fbi.gov.”