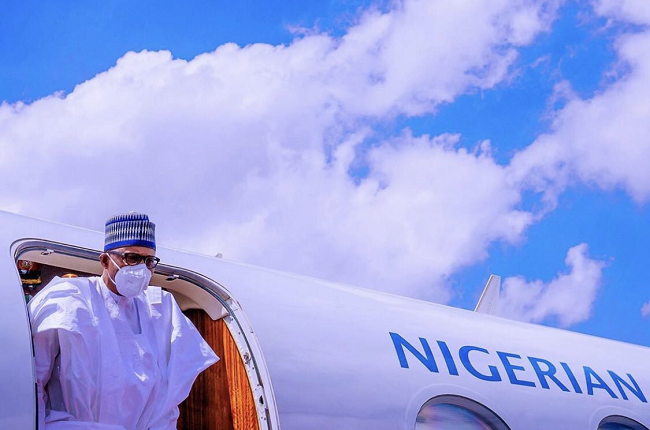 President Muhammadu Buhari has arrived Daura, his hometown, for a one-week private visit.

The president left the presidential villa, Abuja after Friday Muslim prayers for his home state, Katsina.

Presidential spokesman, Garba Shehu, confirmed the president’s arrival in a tweet on his personal handle @GarShehu, saying: “President Muhammadu Buhari has just landed at the Helipad in Daura, Katsina State for a weeklong private visit.”

Shehu, in an official statement later, confirmed that while in Daura, President Buhari will carry out a number of private engagements but is expected to participate virtually in the meeting of the Federal Executive Council (FEC) on Wednesday, to be presided over by the Vice President, Professor Yemi Osinbajo, SAN.

The statement recalled that the president last visited his hometown in December 2019, having stayed away largely due to the global COVID-19 situation.

It said the aircraft carrying the president from Abuja landed at 4:45 pm on Friday at the Umaru Musa Yar’Adua International Airport in Katsina where he was received by the Governor, Aminu Bello Masari, his deputy, Mannir Yakubu, senior government officials and the heads of security agencies in the state.

In Daura to receive President Buhari at the helipad where the Emir, His Highness Alhaji Umar Faruk Umar, leading the members of the Emirate Council and a parade of colourful horse riders and courtiers.

Shortly upon disembarkation, the president received the gift of a horse and a decorated sword in his capacity as Bayajiddan Daura from the Emir, the statement said.

The British Parliament at the Westminster Hall held a debate on ‘e-petition 554150, relating to Nigeria and the sanctions regime’ on Monday. The government of the United Kingdom has however responded…Buhari arrives Daura    Buhari arrives Daura