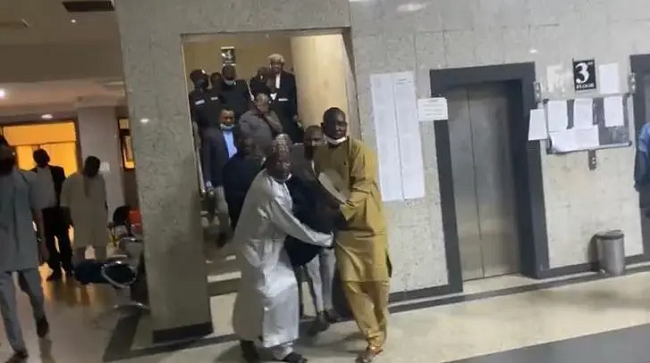 The wife of the former head of the Intelligence Response Team (IRT) of the Nigeria Police Force, suspended Deputy Commissioner of Police, Abba Kyari on Monday slumped court.

DCP Abba Kyari is standing trial along with four other codefendants over on an eight-count charge, bordering on conspiracy, obstruction, dealing in cocaine, and other related offences.

While Kyari and three other defendants, ACP Sunday Ubua, ASP Bawa James, Inspector Simon Agirigba, Inspector John Nuhu, who are Police officers pleaded not guilty to the eight counts charge, the two civilians, Chibuinna Patrick Umeibe and Emeka Alphonsus Ezenwanne pleaded guilty to the three charges to which they were involved.

Kyari’s wife slumped while using the stair case of the Federal High Court in Abuja after the Judge, Justice Emeka Nwite handling the case of her husband and his codefendants on the fifth floor of the court shifted ruling on her husband’s bail application to March 28.

She was rushed to the processes office, on the third floor of the court by operatives of the National Drug Law Enforcement Agency (NDLEA).

She was said to be recuperating in that office, with Kyari with her, as at the time of filling this report.