Journalists must stand up, fight for better Nigeria ― Alaafin 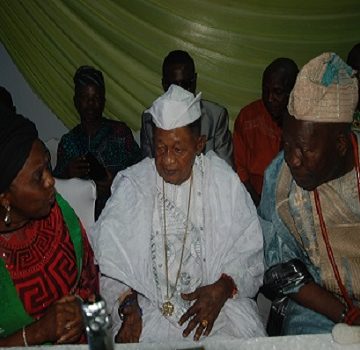 Reminiscing the outstanding qualities of journalists of the past, the Alaafin of Oyo, Oba Lamidi Adeyemi, has tasked today’s journalists to fight and stand up for truth, equity and justice in the country.

Pointing to exemplary attributes of veteran journalists like Chief Olusegun Osoba, late Mr Peter Ajayi and Mr Felix Adenaike who used masterly prose and argumentative writing to confront the British, Oba Adeyemi said modern journalists must utilise their talents to mandate government to deliver on its promises to the society.

Oba Adeyemi gave this charge at the grand finale and awards of excellence to some Nigerians as part of events by the League of Veteran Journalists, Ogun and Oyo states to celebrate 160 years of journalism in Nigeria.

At the event held in Ibadan, on Tuesday, the Alaafin enjoined journalists not to shy away from critiquing those in government, and like veteran journalists not be after money.

He particularly praised Nigerian Tribune for remaining firm in being renowned as a newspaper that stands for truth, equity and justice.

Noting that Nigerian Tribune since established by Chief Obafemi Awolowo had produced many veterans, the Olubadan of Ibadan land, Oba Saliu Adetunji tasked Tribune to continue to live up to being known to be the voice of the voiceless and change agent of the society.

In his opening remarks, Chairman, League of Veteran Journalists, Oyo State, Mr Banji Ogundele praised the effort of journalists over the years in shaping the society.

Speaking on behalf of the awardees, Mrs Olukemi Ajayi, who is the wife of Mr Peter Ajayi, charged journalists to ensure that journalism remains at the forefront of canvassing for a better society.