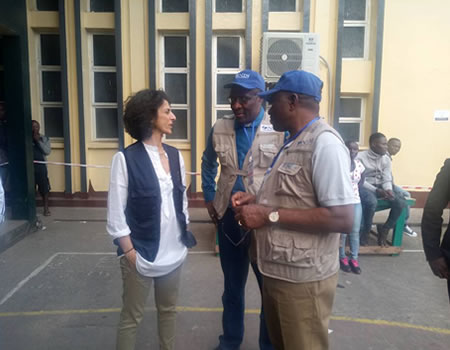 Jonathan, who has just returned from Monrovia after leading the National Democratic Institute (NDI) International Elections Observation Mission to Liberia, posted the goodwill message to Weah on his Facebook page, on Friday.

Jonathan advised Weah to maintain his open door policy in his new position, saying “everybody is a winner when democracy wins, and democracy has won today.”

Weah, a retired international footballer and standard-bearer of the Coalition for Democratic Change (CDC) was declared the winner on Friday after the Boxing Day run-off polls by Liberia’s national electoral commission.

Jonathan also commended Liberians for demonstrating the willingness to give democracy a
chance.

“Throughout my political life, I have lived by the creed that nobody’s political ambition is worth the blood of their citizens.

“I am most grateful to the nation of Liberia and especially the candidates, Weah and Mr Joseph Boakai, for living up to this creed.

“As co-leader of the NDI International Elections Observation Mission to Liberia for these elections, I salute the zest for democracy of the Liberian people.”

Jonathan and other leaders of the NDI delegation had in a preliminary statement issued in Monrovia on Thursday, acclaimed the polls as peaceful, orderly and well-organized.

Speaking of his experienced on the field on the voting day, Jonathan said: “I am proud of Liberians, who have come from crisis to democracy and have shown themselves to be a model of peace and stability in the region.

In the same vein, Kosovo’s former President Atifete Jahjaga, also congratulated the people of Liberia for exercising their right to vote and for making a historic step towards the consolidation of democracy in their country.

“It is my hope that the positive trends that we have observed during this election will be sustained and further improved during future elections.”

Yusuf Buhari: Allow family to deal with own problem – Shehu