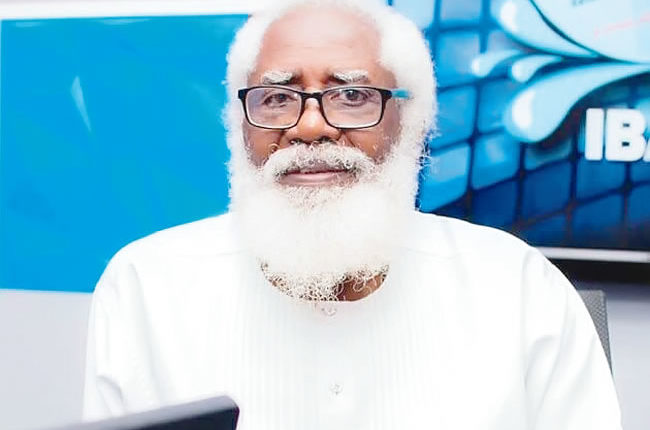 Late veteran actor, Chief Jimoh Aliu deserves a national burial, a former governor of Oyo State and veteran broadcaster, Senator Rasidi Adewolu Ladoja and Dr. Yemi Farounbi respectively, have stated. He will, therefore, be given one on the 20th of November in Ado-Ekiti. Talking as a firsthand eyewitness to the Okemesi-born icon and dramatist’s life and times on stage, Ambassador Yemi Farounbi, a veteran journalist and ace broadcaster, speaks with FEMI OGUNTAYO about how he produced most of Jimoh Aliu’s plays, how Jimoh Aliu came into limelight and other burning issues. EXCERPTS:

In this year, 2020 alone we have recorded several deaths of movie veterans; the likes of Jimoh Aliu, Pa Kasumu, and many more. What would you say is the implication of this on the Nigerian movie industry?

In terms of implication, it might not mean much, because we have stopped the process of mentorship in the industry. If it was in the past, for you to be a theatre practitioner, you have to be under the mentorship of a theatre group leader – the likes of Jimoh Aliu, I-Show Pepper, Akin Ogungbe, Lere Paimo and so on. You have to be under their mentoring, and under them, you would be trained on various aspects of theatre, like dance, acting, singing and even drumming. But all of that has faded away, because the stage theatre faded away and the video and movie theatre took over. So, that is why you might not particularly feel their absenced in that aspect of mentoring and training, but definitely, you will miss their individual qualities of acting that they displayed. They had peculiar approaches to drama. In the case of Jimoh Aliu, you will miss more than his acting, you will miss his composition, his singing, his story writing and storytelling skills; he was an all-round artiste.

Talking about Jimoh Aliu, you were very close to him while he was alive; would you tell us how your relationship with him started?

I know quite a lot of things about many of them because of my vantage position of being the General Manager of the NTA Ibadan at a particular time when we had the ‘Drama per Day’. So I knew quite a lot about all of them. But in the case of Jimoh Aliu, I was his producer and in the major production that gave him international and national recognition. I was transferred from NTA Ibadan to NTA Akure in 1981 to be the GM. When I got there, I decided I would not allow any artiste to follow me from NTA Ibadan to NTA Akure. I had made some impression in the mind of the people who were viewers of NTA Ibadan and I wanted to prove that I was a good manager, so I didn’t have to move artists. When I got to Akure, I was asking about who were the good artistes, who were the outstanding artistes in the station? They didn’t have too many, they didn’t have the reputation of building artistes but they mentioned to me that there was one Jimoh Aliu who was living at no 6, Ilepa Street, Ikare, who did one program for them called ‘Afopi Ina’, but whom they had not paid. They described him for me, so I decided to look out for him. I sent my driver and an officer to go to Ikare to bring him. It so happened that he also heard that a new GM had come and thought, perhaps, this famous GM from Ibadan would pay him what was owed him. I think it was N2,000 or so. So he was coming on a Monday to come and see me, and I had already sent an entourage on a Monday to go and bring him. When he came into my office, he was heavily bearded like I was, so when he opened my door, I said are you Jimoh Aliu? He said yes and asked if I was the new GM, I said yes. Then I said, so fast? I sent people to go and look for you, and he said no, he hasn’t seen the people but he heard that there was a new GM and he wanted to see me. Then I asked him, what do you want to see me for? Then he said he did a 2-hour program called ‘Afopi Ina’, for N2000, for NTA Akure and they hadn’t paid. Then I told the accountant to pay him N2500, because he had even spent money to come. Then I told him, now let us talk.

So I discussed it with him and said, can you bring me another story? I will produce it and I will give you N3500. Then he exclaimed, N3500? I said yes! So, he brought a story called ‘Yanpan Yanrin’ and I produced it.

When I saw that, then I decided that I was going to use him to produce a D. O Fagunwa program. When I was in Ibadan, we had done Igbo Irunmale with Duro Ladipo, and before Duro Ladipo died, he and I had a discussion to have Igbo Olodumare. Duro Ladipo told me that day that he would be going to the hospital and I thought he said when he comes back, we will do the production. Whereas, what he told me in Yoruba was, IF he comes back. As it turned out, I was going to look at him in the hospital in UCH, I was on the ground floor when the lightning started striking and the rain came and the story came — Duro Ladipo had passed on, but I had not forgotten that I wanted to do Igbo Olodumare.

So when I saw Jimoh Aliu, you know he was bearded too just like Duro Ladipo, we talked and I said we were going to do Igbo Olodumare and we went to do it at Idanre hills. The hills there provided a natural scene and a beautiful décor, which was how we shot Igbo Olodumare.

How did you introduce Jimoh Aliu to a larger audience?

Incidentally, I had not finished editing when I left NTA. So, they showed it in Akure, not with much effect. So, eventually, I came to start the television service of Oyo State.  During the time I left NTA and the time I started working with Oyo State government, I had established my own company. I spoke with Jimoh, I want to produce you now and we did Igba Owo, that was the first production we did together and that production was shown in OGTV and NTA Ilorin. They must have shown it more than 20 times, because it was a spectacular one.

We did décor, we did design, and we did the location. I remembered that Fadeyi Oloro – Ojo Arowosafe, was going to act a particular scene and we had programmed to use jimmy clips, African beats and when Ojo was about to enter the scene where he was to act and he saw the early scene with this bass deep drum, he himself was scared, he ran back. It was how artistically and aesthetically good we were. But of course I had to pick up a job with the Oyo State government, so I couldn’t run the company. After the 1983 elections and what happened happened and Bola Ige left and I was free on my own, I went back to my own company. They came, and I decided I wanted to introduce Jimoh Aliu to the Ibadan audience. So, what I did was to bring him to the cultural centre to stage the play ‘Afopi  Ina’, that day we made only N248, because we had less than 10 people. He was unknown, completely unknown. But I knew he was good, I knew Ojo Arowosafe was also one of the best actors that we had, that could act any role. He was agile, and he was mobile and teachable. We hadn’t at that time discovered Orisabunmi, it was Sade that was acting Orisabunmi.

So, I decided that it would be a big waste if I could not expose him (Jimoh Aliu) to a larger audience than what we had in Ondo State. So I went to NTA Akure, I negotiated with them and they gave me Igbo Olodumare. I brought it to BCOS, I showed it for 30 weeks. I took it to OGTV, showed it for 30 weeks, took it to NTA Ikeja, showed it for 30 weeks and also NTA Ilorin. Then they saw a new star, they saw Olowo Aiye po l’okurin, they saw an array of artists because we used about 13 theatre groups, all from Ondo and Ekiti states that they had never seen. They were excited. So by the time I now decided to do a stage play with Jimoh Aliu, we did not only do two on Friday fully attended, we did three on Saturday and on Sunday. After we did the third showing, we still had a crowd, so I had to do a fourth show.  It is to show that Igbo Olodumare exposed him to this audience, then I said yes, we have achieved, let us now make our own production for this new captured audience. That was how we came to Arelu.

Can you tell us more about the shortcomings and successes of Jimoh Aliu’s Arelu?

It will interest you to know that it was not initially titled ‘Arelu’, it was titled ‘Ajalu Ipin’, which means ‘a succession of bad events’. It was Bamiji Ojo who was in the Yoruba unit of BCOS that said Ajalu Ipin wasn’t catchy and suggested that we called it Arelu, meaning one problem after the other and of course, we called it Arelu.

Nigeria is filled with talented singers, entertainers —The Cavemen