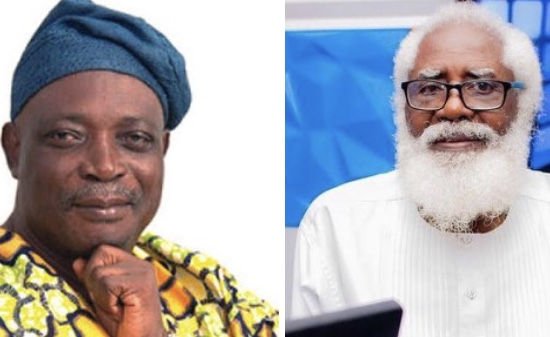 “The late theatre icon and Oba Asa of Yorubaland, Chief Jimoh Aliu (MFR) deserves a national burial because of his immense contribution to the growth Nigeria’s arts, culture and entertainment before his demuse.”

Speaking at the meeting and gathered by Tribune Online, The former governor described late Jimoh Aliu as his personal friend and assured the committee of a befitting burial for the former national President of the Association of National Theatre-art Practitioners (ANTP).

“I will not only come on the day of the final burial ceremony but also witness the artistes’ night in Ado Ekiti. So, consider me as an extended member of the burial committee, because Jimoh Aliu was a national figure whose burial shouldn’t be handled by the family alone but all the southwest governors and in deed the federal government,” Ladoja said.

Earlier on Saturday morning, the Tai Oguntayo-led committee had visited the Alara Aramoko, His Royal Majesty, Oba Olu Adeyemi in his palace in Aramoko to seek his royal support in giving Jimoh Aliu a befitting burial. The monarch who described the late artiste as a ” custodian of Yoruba culture,” promised to see his fellow Ekiti Obas to decide on how they would accord Aworo the deserved last respect.

My convoy was attacked by political thugs not protesting youths — Oyetola