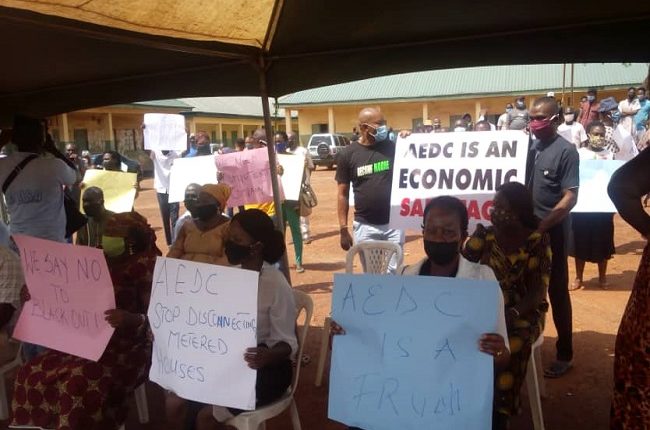 The Jikwoyi Landlord Association has lamented non-metering of houses, poor power supply and inexplicable hike of electricity tariff in the community and its environs.

The Landlords while calling on Federal Government to intervene, however, threatened legal action if their recommendations were not met.

While addressing journalists, the President of Jikwoyi Landlord Association, Emeka Ahuakagha demanded that appreciable power supply is made available within Fourteen (14) days.

He said they are also demanding for immediate construction and installation of new sub-stations within Jikwoyi and its environs, and prepaid meters are made available to consumers and an immediate halt to estimated bills.

“The replacement of all expired cables, wooden poles and broken concrete poles in the Jikwoyi Community. Immediate and unconditional removal of all the auto-reclosures.

“Installation of new transformers and balancing of loads carried by existing transformers.

In the event(s) of failure to meet our demands, the Jikwoyi Landlord Association and the Community shall have no option but to take necessary Legal Measures which may include claims for damages”, Ahuakagha said.

Explaining the situation, Ahuakagha said “the Association had in December 2018, requested for the supply of Prepaid Meters in the Jikwoyi community due to the activities of EDC under the then Area Manager-Hajia Baratu who perpetually kept our community in darkness in order to conserve energy through the use of manually controlled auto-reclosure.

“This was principally to deliberately alter feeder K2 from the injection substation in order to benefit from the proceeds of this act of sabotage.

“It became very clear and obvious that once the feeder is turned off with the auto-reclosure, no energy is consumed and customers in the Jikwoyi axis, who are majorly on estimated billings pay for the energy not used, whereas the Area Manager remits to the transmission based on energy consumed.

“The other strategies deployed were: Removal of fuses from our transformer for days, Open T.off(s) that led to Jikwoyi Community.

The community leadership erroneously thought as at then that the Management of the Transmission Station in Karu colluded to deprive us of power by deliberately leaving the feeder open without faults in order to manage the load.

“At the last Jikwoyi Landlord Association meeting held on Saturday 1st February 2020 arising from series of complaints on the abysmal performance of the Abuja Electricity Distribution Company (AEDC), it was resolved that a press conference to bring to the public, this issue was necessary.

“The incessant power outages at the Jikwoyi Community and its environs have reached alarming, unacceptable, and insecure proportions. The issues which have become a reoccurring decimal in our various meetings, as well as informal discussions, were exhaustively discussed during our meetings of 1st September 2019, 16th November 2019, and 1st February 2020.

While concluding, the Landlords pleaded with the Federal Government to note the abysmal performances of AEDC with respect to Jikwoyi Community and its environs, and consequently fast track the process of bringing more competent and business-minded players for efficient service delivery.

“The Federal Government should as a matter of urgent national interest consider the termination of the contract earlier entered into with AEDC, noting the fact that the contract includes the provision of more equipment and better service.

“From all indications, it is clear that AEDC neither provided new equipment(s) nor improved service but rather relied on the equipment(s) inherited, which have become obsolete,” Ahuakagha added.