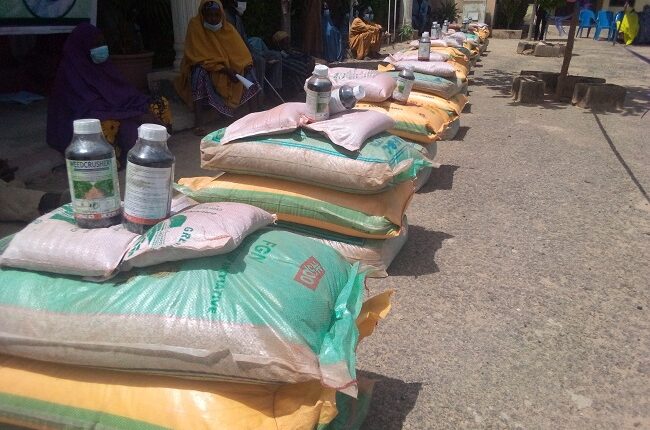 Governor Mohammed Badaru Abubakar was represented by his deputy, Mal. Umar Namadi said the programme is aimed at addressing the socioeconomic disruptions and hardship caused by the Covid-19 pandemic. According to the World Bank, the extreme poverty rate in Nigeria is likely to increase by a couple of percentage points, while the number of extreme poor is likely to increase by 10 to 15 million by 2022.

Launching the Agricultural and Rural Development Authority (JARDA)programme in Dutse, the governor said the programme was Initiated by the Federal Government, assisted by World Bank and implemented in partnership and collaboration with the state government and tagged it as Nigeria Covid-19 Action Recovery and Economic Stimulus (NG-CARES) and domesticated it to J-CARES.

According to him “the programme will revive and expand access to means of sustainable livelihoods, support food security services, and provide grants for poor and vulnerable households and businesses.”

Namadi explained that “In its efforts to ensure the successful implementation of the program, the Jigawa government has injected the sum of one billion naira into the program to compliment the seven hundred million naira so far released to the state making the total of N1.7 billion.”

He maintained that the event is to symbolically launch the J-CARES grant disbursement and other support services to be provided under its various platforms.

Speaking earlier the state commissioner of Agriculture and Natural resources, Mr Auwalu D Sankara the Federal Government and the World bank had released the sum of N700 and subsequently released another one billion.

“The Jigawa State Government is grateful to the federal government of Nigeria and the Bank under the NG-CARES programme for the first batch release of N700,000, 000 and subsequent release of N1,000,000,000 by the state government for the smooth take-up of the programme.”

The Agricultural commissioner added that the three result areas will re-enforce each other while avoiding duplication, as under agriculture result area 2 (FADAMA) will take care of boosting demand for agricultural produces for farmers and food supplies, retain or create jobs using labour intensive method in key areas such as agricultural facility maintenance.

The state government has approved and released the sum of N678 Million to result in Area 2 (FADAMA), for the prompt take-up of the programme and implementation. “A total number of beneficiaries is 4,520Agricultural Inputs and services, termed as DLI 2.1 has 3,000”.

He added that the beneficiaries while Labour Intensive Agricultural Infrastructures termed DLI 2.2 has 1,520 beneficiaries for the commencement of Implementation and launching 790 beneficiaries have already been reached out with all their disbursements prepared and ready at their various LGAs awaiting verification and subsequent distribution.

Sankara maintained that a total of 1,580 bags of NPK and 790 bags of Urea Fertilizers with 1,580 litres of Agrochemicals will be given to 790 benefiting farmers under DLI 2.1. Under DLI 2.2 i.e. Labour Intensive Agricultural Infrastructure, 1,520 farmers/Marketers will benefit from the rehabilitation of feeder roads and the Rehabilitation of Tertiary Irrigation canals in two locations of the state.

In due course, Nigerians will appreciate you, Tinubu tells Buhari