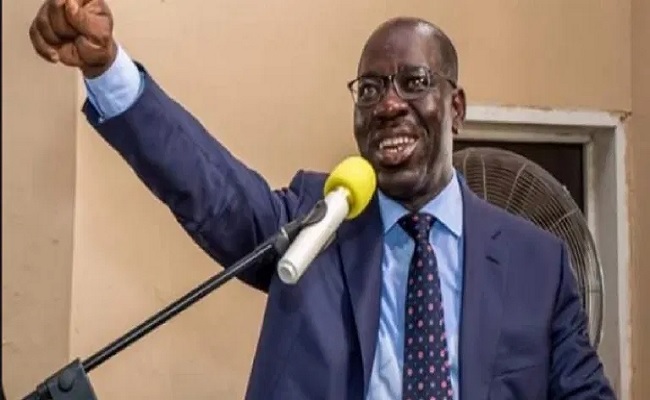 The governorship candidate of the Peoples Democratic Party (PDP) in the forthcoming governorship election in Ondo State, Mr Eyitayo Jegede, on Monday congratulated Governor Godwin Obaseki of Edo state, on his reelection as the governor of the state in the just-concluded Edo gubernatorial polls, describing the victory as the manifestation of people’s wish.

Jegede in a statement signed by his media aide, Samuel Fasua, on Monday said the result of the election has opened a new and better era in the polity, saying it was a manifestation of the people’s conviction that the PDP is the credible alternative, that can provide good governance for the people.

The PDP candidate said, “I express personal joy at the victory of Governor Godwin Obaseki of Edo State; particularly for the fact that it symbolised Nigerians’ disenchantment with the ensuing poor leadership under the All Progressives Congress (APC) and their conviction that a PDP government is the credible alternative.”

He said the PDP is a political party that institutionalises inclusive democracy, which gives equal opportunities to party members, as against the dominance of a cabal of political godfathers.

“Governor Obaseki is now vindicated, having taken a bold step in coming over to the PDP, a political party that cherishes the masses; that is grassroots-oriented, and that does not pander to godfatherism.

“We rejoice with him and the government and good people of Edo State, for this unequivocal rejection of the slave masters, through the sanctity of the vote,” Jegede said

The PDP candidate also said, like their Edo neighbours, voters in Ondo State were fully prepared to exercise their inalienable right to determining who governs the state, come October 10, this year.

His words “What has taken place in Edo thus beckons on our good people of Ondo State, to bear their destiny in their hands, by similarly rejecting these feudal lords posing as democratic leaders, and elect the PDP in the October 10 governorship election.

“Our people should, in unison, make their choice known through the coming election, that they choose good governance and reject bad leadership,”

Jegede however, called on the Independent National Electoral Commission (INEC) and the relevant security agencies to discharge their duties creditably, for the good of our democracy.