I’ve handed over power back to Buhari — Osinbajo 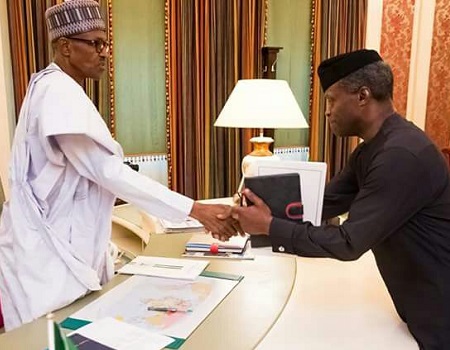 VICE President Yemi Osinbajo said he has passed the baton of power back to President Muhammadu Buhari and has reverted to his role as the Vice President.

He confirmed this in a chat with State House correspondents while emerging from about an hour-long meeting with the president in his office at the Presidential Villa, Abuja on Monday.

He said the president is now ready to assume his duties even though he would continue to delegate some duties to him as Vice President as had been the case.

Responding to enquiry on whether he has handed over power, stated: “Oh yes! I’m back to my regular position as vice president.”

Asked how the president is doing, he said: “He is very well. We just had a very long meeting where basically trying to bring the President up to speed as to some of the things we have done while he was away‎.

“And he has given a few directives on what we should be doing on so many areas, the north east, budget, the economy, a wide range of issues.”

On whether Buhari is ready for the work, he said: “He held a meeting with me for over an hour where we discussed a wide range of issues. So, his readiness for work is not in doubt at all. In fact he has over ready.”

He also commented on the possible delegation of more duties to him in view of the president’s state of health, saying: “I think the president as you know has always given me several responsibilities. I think what we must recognise is that the way this administration work is that it has always been team work.

“It is necessarily delegation, yes in some cases delegation, but by and large, practically everything I discuss fully with him and have his endorsement before we are able to go on and do anything at all.”

Senate versus Customs CG: How Ali landed in trouble