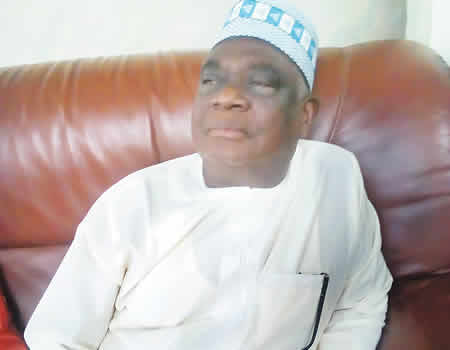 Senator Ignatius Longjan was deputy governor of Plateau State, currently, a member of the Ninth Assembly representing Plateau South Federal Constituency. In this interview with ISAAC SHOBAYO, the retired career diplomat speaks on the present row between Nigeria and South Africa and other topical issues.

what is the way out of the diplomatic row between Nigeria and South Africa?

It is something that took us unawares, considering what we did for South Africa. I was still in the foreign service then, when the Nigerian government, along with some African independent nations shouldered the responsibility of taking the country out of apartheid regime. The late Head of State, General Murtala Mohammed and former President Olusegun Obasanjo played critical roles in this regard.

But with what is happening now, many of us are surprised that the South African government can fold its arms and watch our citizens being humiliated by its citizens. This is quite unfortunate. But hostility against Nigeria is not new to those of us who had the privilege of working at the foreign level. I was in New York when Professor Ibrahim Gambari was to be nominated as permanent representative to the United Nations (UN), just the way Professor Mohammed Tijani Bande was elected as the president of the 74th Session of the United Nations General Assembly (UNGA). I was there, not only as an observer, but also as a foreign diplomat. It may interest you to know that there were some African countries which Nigeria had helped that voted against Nigeria. Many of us were shocked that these African countries, which had benefited from us, could turn their backs on Nigeria. In spite of our benevolence to them, some are taking us for granted.

The xenophobic attacks against African countries’ nationals, especially Nigerians living in South Africa, are an insult and a huge disappointment. We were humiliated. It is like they don’t have a sense of history. Many Nigerians felt bad that South Africa could do this to Nigeria. But by and large, we need to be calmed and give the safety of our nationals in that country and in other places a priority. As a matter of urgency, the returnees should be taken care of, because they had lost all what they laboured for in that country. The Federal Government has taken a good step by sending high powered delegation to South Africa to open up discussion with the government. The state and local governments must take care of them. The steps taken by the Federal Government are in order, but we should be calm. Don’t rush; if you rush, you make mistakes.

Don’t you think Nigeria should review its foreign policy?

We need to review it, but the technicalities involved are very cumbersome. We have to be very careful. If you have places like Niger, Cameroun and Chad, and you are hostile to them, they can make way for your enemies to come to berth there and attack you. That is why when we are trying to please neighbouring countries, it is simply because we don’t want them to pave the way for enemies to come to attack us. So, you have to treat them like babies. If Nigeria should rush to take drastic action, it could backfire on the country.

However, Nigeria should review its relationship with South Africa, if that will be the way out of the present diplomatic logjam and quagmire.

How would you reconcile your former position as the deputy governor of Plateau State and the current one as senator of the Federal Republic of Nigeria?

I was a deputy governor for four years and now, a senator of the Federal Republic of Nigeria. It is a completely different thing. By virtue of my position as a senator, I represent my constituency and the entire Nigeria. I should have interest in whatever happens in the country and contribute positively.

But in the case of the National Assembly, it is not like that. I can be heard and I can speak out without permission from anybody. Though I have a boss who is the Senate President, he can’t stop me from talking; he cannot stop me from expressing my view. I have the right to go out of the Senate and address the press, if I am not satisfied. But as a subordinate, you cannot do this.

As deputy governor, you have less roles to play, more so that the constitution does not define the role of a deputy governor. The governor has enormous power.

ALSO READ: Osinbajo, Fashola: Carrying the can for others…

What is your reaction to the insinuation that you are holding this position for Governor Simon Lalong to contest for the Senate in 2023 after his tenure?

Is it that I am performing below expectations and it is Lalong that will perform better than me? What is the reason for that? I have been hearing this, but I am not disturbed. Yes, Lalong is governor. You are correct. I have been hearing it that Lalong put me there that, maybe, after his governance, he will take over from me. Is it that simple to take over from another person? Definitely, if I am about to go, I will look at myself and I might decide to say it is enough for me; I want to go and rest. That is a different thing entirely. Even if I am saying that, I cannot just come out in the Southern zone and say ‘give it to Lalong.’ You know, they will not spare me. It is going to be open to everybody. I may decide not to contest again because of my age and allow the young ones to continue. And if people say give it to Lalong and I refuse, you know the people will not spare me.

When the time comes, we will know how to cross the river.

What do you think should be done to deepen democracy in Nigeria?

Intially, I thought the functions of the executive and legislature over lap, but after the first sitting at the Senate, I discovered that it was a different ball game. I discovered that I was a fresher along with others that were coming in for the first time. The present Senate is making concerted efforts to make a difference and partner with the executive to make Nigeria better. The Senate president knows what he is doing. He has a solid background and experience in the act of lawmaking. He has been around for quite some time. I remember he said that budget is supposed to be announced in January and he is making efforts to ensure that. This year’s budget was announced in June. It is something very odd. In advanced democracy, this cannot be tolerated. But the Senate president said the moment a budget proposal is submitted, either towards the end of the month of September or in October, no senator will travel until justice is done to the budget. He further assured that budget must be handled to the Presidency latest by December and by January, it must be announced. By implementing a budget in June, it simply means that our democracy is still at infancy. A typical example of the seriousness of the National Assembly was demonstrated during the ministerial screening. We suspended our recess to attend to the screening. The Senate is doing this to make a difference. This Ninth Assembly is out to put things in proper perspective.

What do you think should be done to tame the security challenges facing the country?

Crime is everywhere. Civilisation also could be dangerous. If you take time to digest the insecurity in Nigeria and analyse it properly, there is quite a lot of factors responsible for this. This phone you are holding is also part of the problem. It facilitates crime and makes it easy for kidnappers to demand for ransom. Unemployment is a major factor. You can imagine the number of graduates the universities and other tertiary institutions are producing yearly without employment. Though the Federal Government is trying, it still needs to do more. The unemployment in this country is quite alarming. Kidnapping has been existing for long, but some Nigerians have taken it as a lucrative business, because of hunger. Our government needs to work on this.

Also, young men in this country are on the fast lane of life. They want to make it quickly. They want to live big. So, the urge for money among the youth is high. Therefore, governments at the federal and state levels should collaborate to fight the menace.

Major roads linking your constituency, such as Lafia – Shendam – Ibi in Taraba State are in deplorable conditions. What are you doing towards reconstruction of these roads?

My intention is to take advantage of being a senator to lure development to my constituency. These roads you mentioned are major commercial roads that have been abandoned for long. They were constructed during General Yakubu Gowon’s administration. When I was elected, the roads were parts of the projects on my mind. After our inauguration, I made efforts to contact senators from Nasarawa and Taraba states to see what we can do to get the roads reconstructed. We have started talking. I have mentioned the roads on the floor of the Senate.

Apart from these, the Manchok – Jos road is bad, likewise the road from Pambeguwa down to Jos. The senators from the three states will lobby and appeal to our colleagues from other parts of the country to help us in this regard.