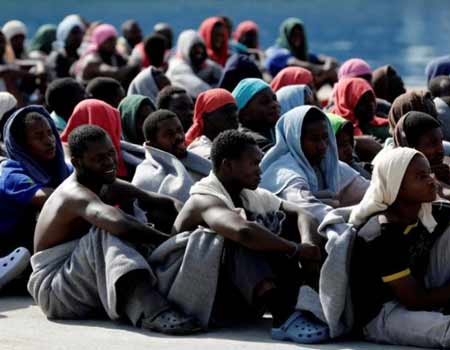 Italy on Friday adopted measures to accelerate the asylum process, easing pressure on shelters and speeding deportations of those whose appeals are rejected.

With an emergency decree, Prime Minister Paolo Gentiloni’s government cut the number of possible appeals to an asylum ruling by a state-run committee to two from three.

The current process has caused a bottleneck in civil courts following hundreds of thousands of boat migrant arrivals in recent years, with a definitive response to an asylum request taking some two years, Interior Minister Marco Minniti said. But they can take much longer.

“The process will be much more streamlined but people’s rights will not be diminished,” Justice Minister Andrea Orlando told reporters after a Cabinet meeting.

Orlando said the government acted by decree because the court backlog was stacking up quickly and during the appeals process migrants have a right to remain in asylum-seeker shelters, which are filling up.

Some 175,000 are currently being housed in such shelters and more boat migrants are arriving almost every day. Italy currently has a capacity to house 200,000, as reported by Reuters.

A record 181,000 boat migrants arrived in Italy last year and the committees that handle asylum bids rejected more than 60 percent of the 124,000 requests received.

Until last year, Rome turned a blind eye to many migrants and let them head north. Now, in line with European Union law, Brussels requires Italy to set up migrant centers called “hotspots”, while many countries, including Germany, have sealed their borders against migrants.

In the hotspots, officials distinguish between those who say they were persecuted or faced serious harm, and those who fled poverty, who are supposed to be sent home.

Since there is no other way to legally stay in Italy, many migrants ask for asylum even if they do not qualify and they then can appeal three times if they are refused.

Humanitarian groups have come out against shortening the court process, an idea Orlando first proposed last year, calling it unconstitutional and saying migrant rights’ would suffer.

But the Interior Ministry said that it would hire 250 specialists in immigration to staff the committees that weigh asylum requests.

Also, according to the decree, the committee’s interview with the asylum seeker will be video-recorded so that judges do not have to conduct a new interview during the appeals process. The decree foresees 12 special tribunals to exclusively handle asylum appeals.

The decree includes measures that will help Italy increase deportations and toughen its stance on irregular migrants that were detailed earlier this week.

Italy coronavirus deaths rise by 662 in a day, lifting total death toll to 8,165

Italy coronavirus deaths rise by 651 in a day, lifting total death toll to 5,476