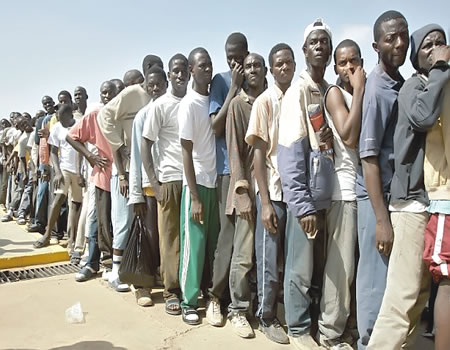 ISRAEL has started handing out notices to 20,000 male African migrants giving them two months to leave the country or risk being thrown in jail.

Prime Minister Benjamin Netanyahu’s government is offering the migrants, most of who are from Sudan and Eritrea, $3,500 and a plane ticket to what it says is a safe destination in another country in sub-Saharan Africa.

The fate of some 37,000 Africans in Israel is posing a moral dilemma for a state founded a haven for Jews from persecution and a national home. The right-wing government is under pressure from its nationalist voter base to expel the migrants, while others are calling for them to be taken in.

The government says the migrants are “infiltrators” looking for work rather than an asylum, but there is a growing liberal backlash against the plan, including from rabbis, a small group of survivors of the Nazi Holocaust and ordinary people who say Israel should show greater compassion to the migrants.

The first eviction notices were handed out on Sunday and job advertisements for immigration inspectors to implement the deportation plan have been posted on government websites.

Rights groups advocating on behalf of the migrants say many fled abuse and war and their expulsion, even to a different country in Africa, would endanger them further.

“I don’t know what to do. Rwanda, Uganda are not my countries, what will a third country help me?” said Eritrean Berihu Ainom, after receiving an eviction notice on Sunday.

The deportation notices do not name the country migrants will be flown to but Netanyahu has said it will be a safe destination. Rights groups have named Uganda and Rwanda as possible host countries.

In a poor neighbourhood in the south of Tel Aviv that has attracted thousands of African migrants, shops are dotted with signs in Tigrinya and other African languages while abandoned warehouses have been converted into churches.

“I came to Israel to save my life,” said Eritrean Afoworki Kidane, sitting on a street bench.

He said he would rather go to jail than take the cash and plane ticket on offer to leave the country that has been his home for nine years.

Interior Minister Aryeh Deri said Israel’s first obligation was to its own citizens, rather than the migrants.

“They are not numbers, they are people, they are human and I am full of compassion and mercy,” Deri told Army Radio. “But the small state of Israel cannot contain such a vast number of illegal infiltrators.”

But opposition to the plan has been building and some Israelis are now offering to take migrants at risk of expulsion into their homes.

On Thursday, a group of 36 Holocaust survivors sent a letter to Netanyahu asking him not to deport the migrants. The US-based Anti Defamation League has also urged Israel to reconsider the plan, citing “Jewish values and refugee heritage”.

Africa has 1.2 billion people and only six labs that can test for coronavirus —…