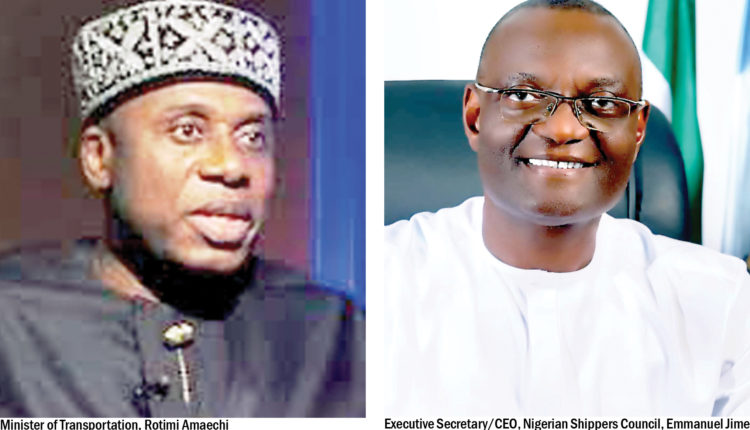 Following the imposition of arbitrary charges on cargo owners by foreign shipping companies at the nation’s ports, clearing agents and truckers operating at the ports have issued a two-week strike notice with effect from November 10, 2021, after failed efforts by the Nigerian Shippers’ Council (NSC) to call the shipping lines to order, writes TOLA ADENUBI.

Established in 1978 to address deteriorating quality of shipping services and unmitigated increases in ocean freight rates by foreign ship owners who operated scheduled liner services to Nigerian ports, the Nigerian Shippers’ Council (NSC) was appointed the Port Economic Regulator in February 2014 by the Federal Government to create an effective regulatory regime at the nation’s ports for the control of tariff, rates, charges and other economic services. The agency was also saddled with the responsibility of addressing the negative impact of port concession activities on the economy due to the absence of an economic regulator and to realize the optimal benefits of the Federal Government port reform processes.

However, eight years after its appointment, allegations of sharp practices by foreign shipping companies on Nigerian cargo owners have bedevilled the economic scene of Nigeria’s port operation procedures.

For many truckers who move units of import containers out of the ports on a daily basis and return empty containers to the different holding bays of the foreign shipping companies, operations have been traumatic in recent weeks due to impounding of trucks by shipping companies over allegations of various degrees of debt.

Speaking to the Nigerian Tribune on the development, President of the Association of Maritime Truck Owners (AMATO), Chief Remi Ogungbemi lamented that the shipping companies are operating in Nigeria as if there is no government to check their excesses. According to the AMATO Chief, “We have written to the Nigerian Shippers Council (NSC) on the excesses of the shipping lines, but it seems the shipping companies don’t even regard the port economic regulator.

“We have told the NSC that we cannot continue to pay for what we did not cause. Sometimes, the shipping companies charge our members N1 million as detention charges on an empty container that arrived late to their holding bay. We have heard of some of our members being slammed N3 million as detention charges. If our members refuse to pay, their trucks would be impounded by the shipping companies through different security operatives.

“How can they (shipping companies) be slamming detention charges on us?  Instead, we are the ones that are supposed to be billing them for carrying their containers on our trucks for longer periods of time due to the unpredictable nature of our roads, particularly the ports access roads. Since the NSC seems helpless to address the issue, we will henceforth be charming the shipping companies for the number of days our trucks carry their empty container around due to no fault of ours.

“Aside from the detention charges that the shipping companies bill our members, we know how much we pay at times just to access their holding bays. This illegality has to stop.”

For many port users, the inability of the NSC to bite after barking is the major reason why the shipping companies don’t regard the agency’s summons or threat. Speaking recently on the issue, the National Vice President of the Association of Nigerian Licensed Customs Agents (ANLCA), Dr. Kayode Farinto explained that the powers conferring economic regulator status on the NSC is not backed by any law in Nigeria but just an executive fiat.

“The foreign shipping companies know this. Don’t forget that many of these foreign shipping companies come from saner climes where democratic tendencies are followed to the latter. They know there is no law backing up the status of the NSC as the Port Economic Regulator, and that is why they choose to either respond to the NSC calls or ignore them.

“That is why since the announcement of the NSC as Port Economic Regulator, no shipping company has been fined for breach of services by the agency. The last time some shipping companies were fined over issues bothering on holding bay ownership and capacity, it was the NPA that enforced the sanction. That was in 2018.

“The NSC can only carry out its threat to sanction shipping companies if it liaises with the NPA. As of today, the NSC has no such powers to bite, it can only bark. Unfortunately for the NSC, no such relationship exists between the agency and the NPA. It is annoying that these two agencies see themselves as rivals sometimes over port issues. Until both work together, the NSC will continue to bark but cannot bite when issues of arbitrary port charge suffice.”

Recall that shipping companies, at the weekend, boycotted a meeting called by the NSC in collaboration with the Council for the Regulation of Freight Forwarding in Nigeria (CRFFN). The meeting was called to discuss illegal charges and extortion allegations levied against the shipping companies by clearing agents and truckers.

The stakeholders also agreed that the payment of un-receipted N100,000 by freight forwarders, importers and transporters before they are allowed to drop their empty containers should stop with immediate effect.

In the advent that none of the agreements reached is met by the shipping companies, truckers and clearing agents have vowed to shut down the nation’s ports come November 10, 2021.

Why you should be nice to people

Lagos mulls collaboration with NITT on data base development