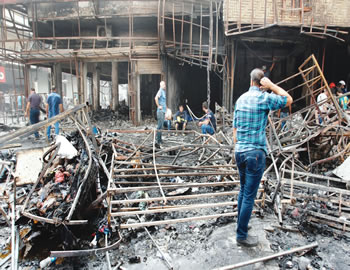 At least 131 people, including many children, were killed and hundreds wounded in a car bombing in a crowded commercial area in Iraq’s capital, Baghdad, hospital and police sources have told Al Jazeera.

The powerful explosion early on Sunday came near the end of the Islamic holy month of Ramadan, when the streets were filled with young people and families out after sunset.

Sources said around 200 people were also wounded when a lorry packed with explosives blew up in a busy shopping street in Karada, a predominantly Shia neighbourhood in central Baghdad.

The Islamic State of Iraq and the Levant (ISIL, also known as ISIS) group claimed responsibility for the attack in an online statement, according to the SITE Intelligence Group, a US-based monitoring service.

Many of the victims were children, officials said, and there were fears the death toll could rise as more bodies could be lying under the rubble of devastated buildings.

In a separate blast also on Sunday morning, an improvised explosive device went off in a popular market in the mainly Shia neighbourhood of al-Shaab.

Reports said at least at least five people were killed in that attack, and 16 were wounded.

There was no immediate claim of responsibility for the second bombing.

The overall death toll from the two explosions was initially reported to be much lower, and there were conflicting reports about the exact number of people killed.

The bombings were the deadliest in the country since Iraqi forces late last monthdislodged ISIL fighters from Fallujah, the armed group’s stronghold just west of the capital that had served as a launch pad for such attacks.

Despite a string of territorial gains by Iraq’s ground forces against ISIL, the group has repeatedly shown it remains capable of launching attacks in Iraqi territory far from the frontlines.

“They are so desperate to boost the morale of their fighters, many of whom are leaving the group daily. I think attacks like this will increase,” he told Al Jazeera.

Rubaie added, however, that ISIL would eventually fail in its mission of deepening sectarian tensions between Shia and Sunni communities.

43 killed in government raids in Syria

BREAKING: Iraqi MPs back plan to expel US troops