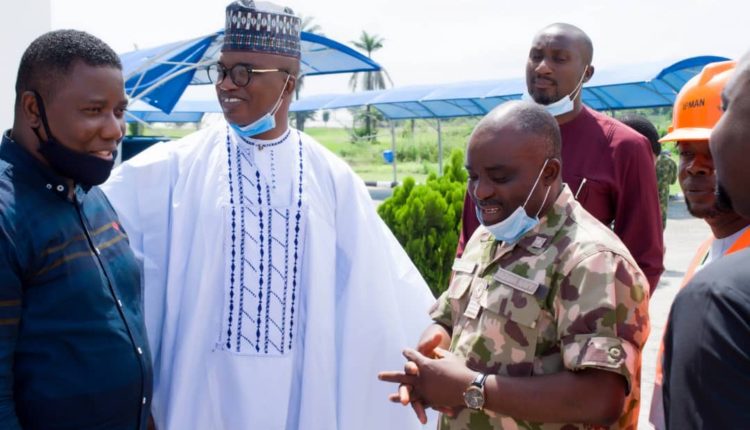 The Independent Petroleum Marketers Association of Nigeria (IPMAN) is to set up monitoring teams that would check some of overzealous members and some unscrupulous Nigerians who are capitalizing on oil bunkering and supplied the products to terrorists, bandits and even kidnappers.

The Senior Special Adviser to the National President of IPMAN, Elder Chinedu Okworonkwo on products, pipeline monitoring and special assignments, Mr Ibrahim Haliru disclosed this in Lokoja with other team members that he led for a courtesy visit to the  Navy and Army Commands.

According to him, the visit which was at the instance of presidential directives mandating the IPMAN to collaborate with security agencies in the state to checkmate all unwholesome activities in the state.

He lamented that recent cases of tankers explosion became rampant across the country, stressing that government can no longer watch innocent citizens die as a result of the explosion that can be control or avoided.

“In Lokoja, for instance, we have been having repeated cases of fuel tankers explosions which had been killing innocent citizens as well as loss of property running into millions of naira and as a result of this pitious and worrisome situation we feel that it is time we take action to put an end to this incidents.

“There are issues of pipeline vandalization and some people illegally refined the crude oil in the creek and push the fake products down into the market and when the unsuspected citizens bought the fuel to use, explosion occured.

“Even in the process of trucking and loading explosion occurs and when you fill your car with such fake product within the shortest possible time, the fuel get exhausted.

Haliru noted that IPMAN in collaboration with security agencies will not leave any stone unturn to arrest and prosecute those indulging on shoddy deals.

“We need to step up our operation to catch up with them in the interest of Nigerians which will lead to productivity to IPMAN and quality service delivery.

“The operation will enhance revenue generation for the country and this will enable the government to attend to some critical infrastructure like hospital, schools, roads among others.

Speaking on the subsidy regime, Haliru appealed to Nigerians to be patient, assuring that when the hitches surrounding the subsidy are removed the product will be available and at low price.

In his remark,  Kogi State Coordinator, IPMAN taskforce on surveillance and monitoring team Mr Abu  Usman said the team will check all products coming into the state with a view to ensure quality of the products and the road worthiness of the truck conveying the products.

He solicited the support of Kogi State government to enable the surveillance team perform  so that we can achieve our plan for the safety of the people.

The Chief Protocol Officer  to the National President of IPMAN, Engr Samson Okereke said IPMAN has concluded arrangement to establish modular refineries in some part of the country, revealing that Kogi state will be one of the benefiting states.

“We have visited the Naval Command  the Army Command and they are very ready to collaborate with us.

“We have designed a mean where we are bring modular refinery and Kogi is a key state that will benefit from the refinery, this will generate employment in the state and it will also increase economic base of the state as businessmen will set up deports here,” he said.

#Endsars: How Nigerians Reacted To Osinbajo’s Statement To The Nation