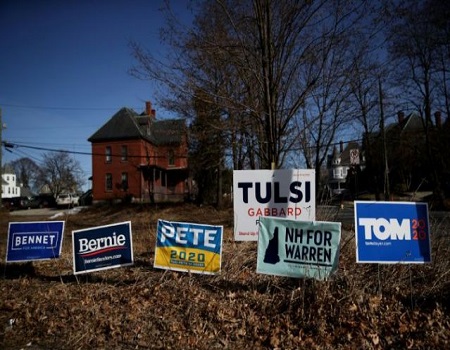 Democratic Party chairman Tom Perez demanded a review of the results of the Iowa caucuses on Thursday after the first contest to decide the party presidential nominee was embarrassingly marred by technical problems.

Three days after the caucuses were held in the Midwestern state, the final results are yet to be released and some doubts have been raised about the accuracy of the returns released so far.

“Enough is enough,” Perez said on Twitter. “In order to assure public confidence in the results, I am calling on the Iowa Democratic Party to immediately begin a recanvass.”

In a subsequent tweet, Perez said a recanvass would involve an examination of the results from each caucus site – rather than a full recount.

The Iowa results released so far have Pete Buttigieg, the moderate former mayor of South Bend, Indiana, and leftist figurehead Bernie Sanders in a dead heat in the first-in-the-nation contest to decide the Democratic nominee to face President Donald Trump in November.

Trump, during remarks at the White House on Thursday celebrating his acquittal at his Senate impeachment trial, mocked the Democrats over the Iowa fiasco.

“The Democrats, they can’t count some simple votes, and yet they want to take over your health care system,” he said. “Think of that.”

Progressive Elizabeth Warren was next with 18.2 per cent followed by former vice president Joe Biden with 15.8 per cent and Minnesota Senator Amy Klobuchar with 12.2 per cent.

Buttigieg appeared to be getting a bounce from his strong performance in Iowa as the latest New Hampshire poll showed the centrist candidate in second place in the Granite State, which holds a primary on Tuesday.

The Boston Globe/WBZ-TV/Suffolk University poll had Sanders, who won the New Hampshire primary four years ago before eventually losing the nomination to Hillary Clinton, topping the field with 25 per cent.

Buttigieg’s support surged from 12 per cent on Monday to 19 per cent now, according to the poll, while Biden saw his backing fall from 18 per cent to 12 per cent over the same period.

“Buttigieg’s movement is real,” David Paleologos, director of the Suffolk University Political Research Center, which conducted the poll, told the Boston Globe. “This is beginning to shape up to be a two-person race.”

Biden, who described his likely fourth-place finish in Iowa as a “gut punch,” was meeting with his advisors on Thursday to map out a strategy moving forward.

Biden has topped the national opinion polls since entering the crowded race for the Democratic presidential nomination and his poor Iowa performance was a jolt to his campaign.

“I expected to do better,” Biden said during a CNN Town Hall in Manchester on Wednesday. “But the fact is I’m happy to be here in New Hampshire.”

Biden also took the gloves off and stepped up his attacks on Sanders and Buttigieg.

“He calls himself a democratic socialist,” he said of Sanders. “Well, we’re already seeing what Donald Trump is going to do with that.”

The 77-year-old Biden, who served in the Senate for 36 years before becoming Barack Obama’s vice president, went after the 38-year-old Buttigieg for a relative lack of experience.

“It’s a risk – to be just straight up with you – for this party to nominate someone who’s never held an office higher than mayor of a town of 100,000 people in Indiana,” Biden said.

The Sanders campaign announced, meanwhile, that it had raised a whopping $25 million in donations in January, its largest fund-raising month to date.