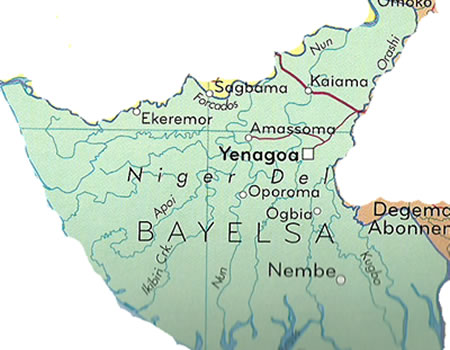 Bayelsa State government says its investment in the health sector is aimed at checkmating capital flight and put an end to age long practice of seeking medical attention abroad.

Speaking during a facility tour of some medical facilities put in place by the Restoration government, the State Deputy Governor, Rear Admiral Gborigbiogha John Jonah accompanied by some top government
functionaries said the facilities would reduce mortality rate as people of the state would have access to quality and affordable health services.

Restating government commitment to qualitative health service, the Deputy Governor said upgrading of Government House clinic to a standard hospital with state of art facilities would go a long way in
addressing health challenges confronting the people of the state.

He added that with the completion of the public and private wings of the hospital, Bayelsans would now have access to some of the facilities at very affordable prices.

He said the era of seeking medical attention abroad is gone forever in the state, adding that most of the tests that our people are travelling abroad for are now being done at the Diagnostic center.

The Deputy Governor posited further that with these facilities in place people from outside the state will be coming to Bayelsa for medical tests and treatments.

According to him, the completion of the diagnostic center, drug Mart, the Government House hospital and few others across has further shown the commitment of this administration to provide qualitative and
affordable health care services.

He, therefore, called on the people of the state to avail themselves of this opportunity.

Speaking in the same vein, the state commissioner of Health, Professor Ebitimitula Etebu said all sorts of operations can be carried out at the new Government House hospital with the kind of facilities in
place.

He said the facilities are world class, submitting that only few states in the Country can boast of it.

Chairman of the National Association of Nigerian Nurses and Midwives, Bayelsa state chapter commended the governor and the team for making available quality healthcare facility especially for pregnant women
and nursing mothers, she says the association is committed to working with the state government to ensure that adequate care is given to every Bayelsan.

On the inspection tour with the Deputy Governor are, the Chief of Staff to the governor, members of the Executive Council, the Chairmen of the Nigeria Labour Congress, Trade Union Congress, Joint Public
Service Negotiating Council and National Association of Nigerian Nurses and Midwives.