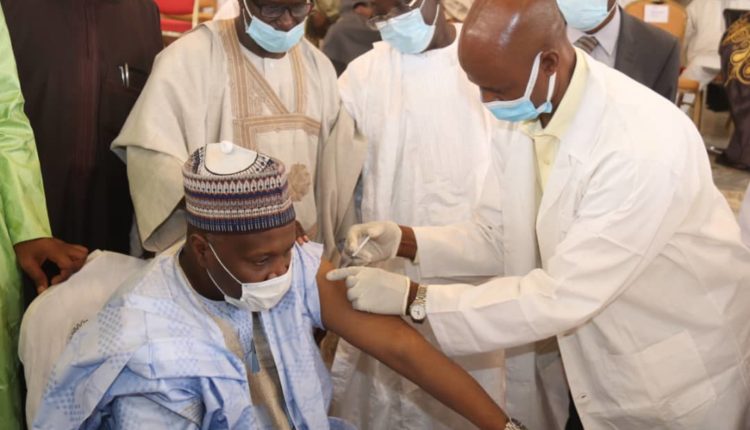 Gombe State Governor, Inuwa Yahaya and his Deputy, Dr Manasseh Daniel Jatau led other State Government functionaries in taking the AstraZeneca vaccine during the flag-off of the covid-19 vaccination exercise in the State on Wednesday.

Shortly after taking the vaccine, the Governor called all leaders from political office holders, religious and traditional leaders to support the implementation of COVID 19 vaccination across all LGAs in the State.

He said that the first phase of the vaccination program in the State will prioritize frontline healthcare workers in both public and private health facilities, adding that, this is in line with global best practices where front-line health workers and other associated health personnel are given due priority.

According to him, “My decision, and that of other senior government officials to take the vaccine in this phase is to demonstrate confidence in the safety and efficacy of the vaccination program”.

He also said subsequent phases of the vaccination campaign will target persons above 50 years of age, those underlying medical conditions such as diabetes, hypertension, heart disease and asthma etc.

Inuwa also said that his Government will not relent in according great priority to the health of its citizens, stressing, “I have a responsibility as Governor to ensure that the health and well being of the people in the state is given the needed attention.

The Governor said “Gombe State has been among the best states across the country that worked tirelessly to curb the spread of COVID 19 among its people.

“My Government has established six isolation centres and built a standard molecular diagnostic laboratory in the fight against covid 19. The rapid response team have also been supported with logistics to conduct their activities across the state,” the Governor stated.

He however commended the Federal Government, for its role in ensuring Nigeria is not left out of the global vaccine program, adding that his Government is making necessary plans to ensure the success of the Covid-19 vaccination campaign. Through careful mapping and targeting of eligible persons during this first phase of the campaign.

Gombe State Government had received a total of 71,340 doses of the vaccines from the Federal Government through the National Primary Health Care Development Agency.

According to the Governor, the vaccines have been found to be very safe and certified by the WHO at the international level and NAFDAC in Nigeria.

“As people of faith, we know that healing and protection come from God alone, but we are also commanded by our religions to take medications and other precautions during periods of ill-health. Vaccinations, just like in the past, have proven to be effective in reducing morbidities and mortalities among our people,” the Governor stated.

Gas explosion injures many in Ilorin