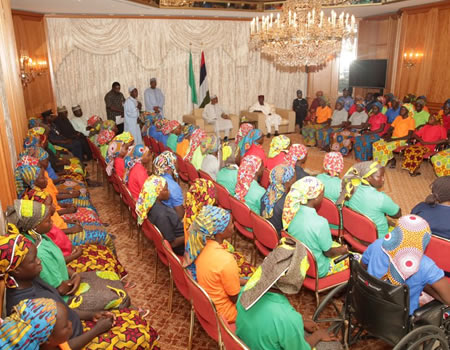 THE Minister of Interior, Gen Abdurrahman Danbazau, on Friday said that the Federal was confident that the Boko Haram would release more Chibok school girls soon.

Danbazau stated this in Minna while speaking to newsmen on the sidelines of the wedding Fatiha of Halima Babangida, daughter of Former Head of State, Ibrahim Babangida.

“By the grace of God, I believe more of the girls will be released as promised by President Muhammadu Buhari.

“Before this administration came on board not a single girl was released, but now over 100 have been freed,” ‎he said.

Danbazau called on Nigerians to have confidence ‎in the ability of government to secure the release of the remaining school girls being held captive by the insurgents.

‎The minister also disclosed that the Federal Government was doing its best to ensure security of lives and property across the country.

“We are trying our best to ensure maximum security of the country,

“Just yesterday I met with the police chief and prominent traditional rulers across the country to discuss the way forward as regards security,” he said

Meanwhile, he wished the couple a happy married life and advised them to tolerate each other.

NAN reports that Minna was agog on Friday during the wedding ceremony, with prominent personalities in attendance, including former president Goodluck Jonathan.

Truckers, agents to shut down Lagos ports on Monday