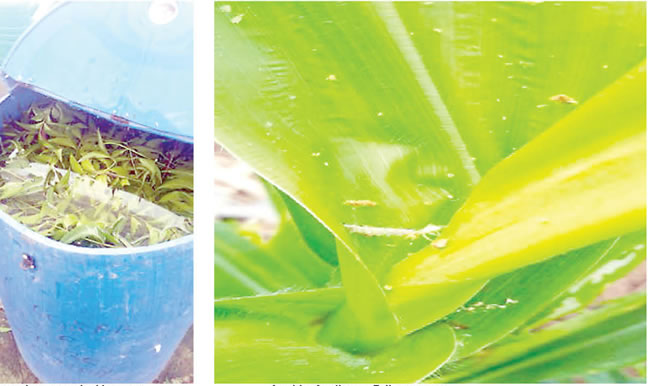 CEREALS productions are important as food and cash crops in Nigeria. Cereals serve as food for humans and as feed for livestock. Cereals commonly cultivated in Nigeria include maize, sorghum, pearl millets, rice, and finger millet. These cereals have been central to the food security of Nigeria.

Maize production has enjoyed renewed interest over the years. Maize (Zea mays L.)  belongs to the grass family Poaceae (formerly Gramineae). All the cereals belong to this family. Maize has been totally domesticated, therefore maize needs farmers care for its survival. Among the cereals, maize has highest grain production potential and highly efficient in transforming sun energy into food energy. This is the reason why the longer the gestation period of maize the higher the yield due to higher production of photosynthate, hence extra-early maize produces lower yield while late maize produces higher yield due to higher production of photosynthate.

Among the world’s cereal crops, maize is the third in rank while wheat and rice rank first and second respectively. However, in Nigeria and in Africa as a whole and in Latin America, Maize rank first while it ranks third after rice and wheat in Asia.  Maize is used in more ways than any other cereal. It is used as human food, livestock feed and for industrial purposes. Every part of maize has economic value; the grain, leaves, stalk, tassel and even the cobs are used to produce hundreds of food and non-food products depending on Countries of the world and the locality where the maize is produced.

In Nigeria, prior to 2016, there have been different biotic factors(pests) and abiotic factors limiting the maize production. Among the biotic factors include witch weed (Striga sp) and various lepidoptera pests like stem borers such as Sesamia calamistis, Busseola fusca, Eldana saccharina etc. However, in early 2016 there was outbreak of Fall armyworm in Southern parts of Nigeria. Thousands of hectares were devoured by this pest. The worst hit cereals are Maize and Sorghum. Within a year or two, the pest has spread to various parts of Nigeria. Fall armyworm (Spodoptera frugiperda) is native to Tropical and Sub -tropical regions of Americas. Spodoptera frugiperda defoliates, destroy, and turn leaves of maize to rag looking mass thus reducing photosynthetic ability of the cereals. The adult is a moth. It has complete metamorphosis, and it is the larva stage that is damaging. The damage become severe in the drought period of the rainy season when rain temporarily cease for a period. The adult Fall armyworm is a moth. It is a nocturnal pest and highly migratory and therefore it is transboundary pest. The pest is a threat to food security of the nation Nigeria and Sub-Saharan Africa. The insect is a polyphagous pest and therefore can change the host to alternative host. It is a threat to agro and agro-allied industries. In the area surveyed in Nigeria, average of 395.05 hectares of land are affected per state. Average crop loss of 68.2% have been recorded per state affected by Fall armyworm. Average of $52.7m were lost per State so far since 2016 in States affected by Fall armyworm. Despite that there have been efforts in 12 States in Nigeria as at 2018, many farmers have abandoned maize planting in those parts of the Country while sale of green maize during time of harvest have reduced drastically.

Birds, rodents, ear wigs, birds, lizards, several wasps and ground beetles are known to be predators of Fall armyworm. However, due to the project sponsored by Korean African Cooperative Initiatives many more predators have been discovered. However, the population of Fall armyworm invading the farm at a time are beyond the capacity of the populations of natural enemies.

Several cultural controls have been proposed for control of Fall armyworms. Due to Korean-Africa Cooperative Initiatives Fall armyworm project, several research is on-going on cultural Control to evaluate and recommend the best cultural control. However, as part of KAFACI Fall armyworm project to the development of Agriculture in Nigeria, farmers have been advised to practice closed season. Closed season is affordable by small scale farmers. All that the farmers need to do is to gather maize or sorghum stalks or rice stalks together after they have harvested their fields and burn them. This will kill the eggs mass, larvae and pupa that were still on the fields after harvest. The destroyed Fall armyworm will not be part of source of infestation for next season crops. The burning will also serve to sterilize the soil against pupa that are resident in the soil. Other cultural control includes use of tolerant varieties and intercropping with cassava, jute mallow, and vegetables and other crops that can serve as trap crops. Also, early planting or the use of early maturing varieties of Maize have been found effective. Deep tillage that destroys pupa in the soil is also effective.

Various control approach has been employed in the control of Fall armyworm in Nigeria. However, the control option that will give the “quick knock down” is the first line of action that a typical African farmer will think of. But environment and health of farmers are   as important as the control of Fall armyworm. However, the best control option is the Integrated Pest Management (IPM) that integrates both the use of insecticides, cultural control, and biological control in economic and environmental balanced approach.

However, for smallholder and resource constrained African farmers, who cannot afford chemicals they can employ the use of neem leaves soaked in water at the rate of 35kg per 100 litres for 48 to 96 hours (2-3 days) as alternative to use of chemical. This is cheap, effective, and environmentally friendly. The KAFACI fall armyworm Project investigators have experimented and obtain 100% result.

Which Preparation Of Hay Is Best For My Horse?

FG projects agriculture to contribute 50% to GDP by 2031