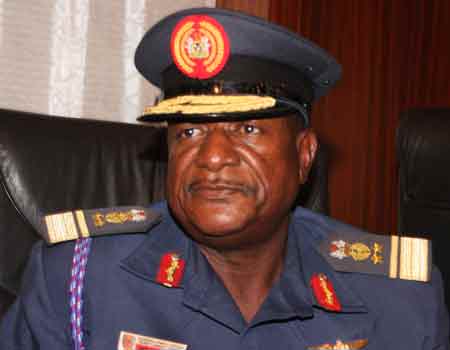 The former Chief of Defence Intelligence, (CDI), Air Vice Marshal Monday Morgan, has dedicated the award recently bestowed on him by the Coalition for good governance in Africa, to President Muhammadu Buhari and the Chief of Army staff, Lieutenant General Tukur Buratai.

The National Coordinator of the Coalition, Honourable Nma Alfa who presented the award to the recipients in Abuja over the weekend said, “It is in recognition of the contribution of the AVM Morgan in restoring security in the country.”

Alfa while presenting the award said, “It was Julius Ceaser’s who said in one of his plays, the eyes sees not itself but by reflection, the Modern day reflection is the Mirror,  I have thus to say of Air vice Marshall Morgan.

“In the words of Sarduna of Sokoto, Sir Ahmadu Bello, do your duty and the society will do you justice. Today, history is made as we honour an illustrious son of Africa, based on his contributions to Regional and National security.”

“Since we are in the era of frivolous and patronising honour, it is pertinent to give a background of this award.  Eminent Africans, who have received this honour in the past include Late Nelson Mandela, Former President of South Africa; Alhaji Ado Bayaro, Late Emir of Kano; Gen. T.Y Danjuma, former Chief of Defence Staff Federal Republic of Nigeria; Mr John Kufor, former President of Ghana; Alh. Umar Musa Yar’adua, the former president of Nigeria; among others.

“This award features two personality per year, for the year 2016, AVM Monday Riku Morgan, the accomplished former Chief of Defence Intelligence, Federal Republic of Nigeria and Her Excellency Ellen Johnson Sirleaf, distinguished President of Liberia are the recipients for this year.

“While we decorate you with this award, you have entered into the Hall of Fame of members of Good Governance in Africa. You have done Africa proud as an illustrious son, who has not dragged the continent in the mud. Today, Nigeria and Africa is proud to have you as a celebrated son”

He added that, the Nigeria Military is the best in Africa with great fit achieved. He attributed the recent victory of the Nigeria Military against the Boko haram insurgency to the resiliennce of the military, and the commitment of President Buhari in implementing his campaign promises. He urged Nigerians to support Mr President and the Military in order to do more for Nigerians.

Buhari should seek inputs from other parties to rescue Nigeria —Gadam, SDP chair