Agriculture
By COLLINS NNABUIFE On Jan 5, 2021 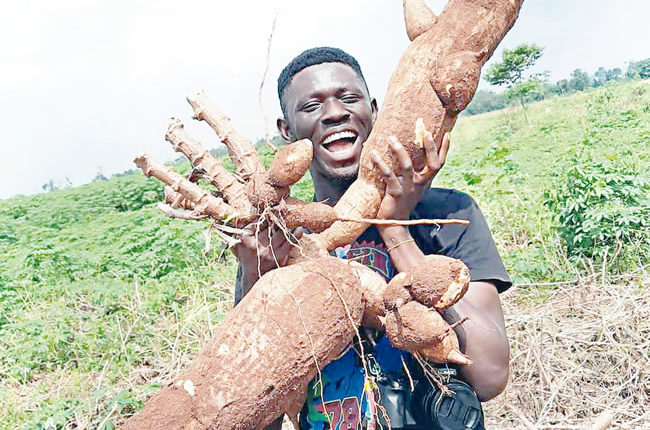 It is no more news that the activities of insurgency in the North East of Nigeria poses a serious food and nutrition risk. This piece by COLLINS NNABUIFE analyse the crisis and how it would affect food production in the region and Nigeria at large:

ACCORDING to a report by the  Food and Agriculture (FAO) of the United Nations, about 9.8 million Nigerians are expected to be in a hunger crisis or worse between November and December this year.

16 northern states including the Federal Capital Territory (FCT), have been identified in the Cadre Hamonise (CH) report on food security and nutrition analysis released on November 5, 2020.

The report said about 13. 8 million people is expected to face acute food shortage crisis between June and August 2021, the number is also foreseen to grow to about 14 million if measures were not taken in time to avert the hunger crisis.

The Cadre Harmonisé (CH) is a current regional framework targeted at preventing food crisis through identifying affected populations and proffering appropriate measures to improve their food and nutrition security.

The CH analysis results in Nigeria which have become the major yardstick for estimating the areas and population of vulnerable people in needs of humanitarian assistance as presented in the annual Humanitarian Needs Overviews (HNOs) and the Humanitarian Response Plans (HRPs),  provides early warning alert to national and state governments as well as development partners including the humanitarian community on looming food insecurity and nutrition gaps faced in the states and is used to galvanise support towards targeted actions.

The CH analysis led by the Federal  Government is facilitated through the National Programme for Food Security (NPFS) with financial and technical support from Food and Agriculture of the United Nations (FAO), the Permanent Interstate Committee for Drought Control in the Sahel (CILSS), the World Food Programme (WFP), the United Nations Children’s Fund (Unicef), European Union, the French Development Agency and the United States Agency for International Development (USAID).

The FAO Representative in Nigeria and the ECOWAS, Fred Kafeero said the results of the analysis had presented the need for urgent intervention by the government.

He said the exercise, which has now been adopted by the Nigeria Food Security stakeholders since 2015 is aimed towards applying the outcome of the analysis in preventing food crisis by identifying the critical areas affected and the populations as well as proffering appropriate measures towards improved food and nutrition.

The exercise, which has now been adopted by the Nigeria Food Security stakeholders since 2015 aims at applying the outcome of the analysis in preventing food crisis by identifying the areas affected and the populations as well as proffering appropriate measures towards improved food and nutrition

This October/November 2020 CH analysis happens to be different from the previous years, as it took Into consideration the impact of the COVID-19 pandemic on the various outcomes of FNS and the inference of the various FNS contributing factors.

“Despite the relaxation of the COVlD-19 lockdown measures, several households are still currently experiencing difficulties in accessing their basic food and nonfood needs due to disrupted livelihoods. This has resulted in reduced HHs opportunities for income and food and nutrition security”,  Kafeero stated.

The report shows that the most affected part of the country is the north east region covering the Borno, Adamawa and Yobe States that are being affected by the armed insurgency leaving millions of people without food and other livelihood means.

The three States are classified to be in crisis and emergency phases of acute food and nutrition analysis.

The report also said that between the time it was released to December last year, it was only Adamawa State which has completely scored better results of being under pressure but without renewed concerted efforts, much of it will slide into food security crisis.

The former Permanent Secretary of the Federal Ministry of Agriculture and Rural Development, Dr. Mua’zu Abdulkadir, said the analysis was not just an early warning alert but a decision making tool to guide points of action for ensuring food security and nutrition situation across all the States involved.

“The results therefore, are expected to reveal the number of those affected by the food and nutrition challenges for the period covered that is October to December 2020 and the projected June to August 2021,” he said.

A Kano state based farmer, Abdullahi Aliyu, said farmers should be encouraged and supported with financial resources, inputs and necessary implement to increase productivity.

While reiterating the need for the federal government to prioritise mechanised farming and train farmers subsequently on the use of mechanised  equipments, he said urgent action should be taken to avert pervasive hunger.

“The budget should include providing funds to the relevant structures for conducting food and nutrition security assessments, including market monitoring, to enable credible and reliable data for the CH analysis and other uses”, stakeholders at the CH presentation said.

While noting that the report lays a foundation for planning effective interventions to prevent further deterioration of the food and nutrition situation in those vulnerable areas, the stakeholders called on the governments to intensify effort to improve the security situation, particularly in inaccessible and partially accessible areas, to provide an opportunity for reaching out to the vulnerable population for humanitarian assistance.

Also emphasising on the need to further mitigate the effect of the Covid-19 pandemic and flood on food and nutrition security, it was recommended that stakeholders particularly, the government should sustain the implementation of relief measures among the populace.

“The efforts should consider the vulnerable population currently needing assistance to assist them with raw food items and farm production inputs.

“There is a need to sustain the current intensive public enlightenment and enforcement of the standard preventive and management measures and protocols set by the National Centre for Disease Control (NCDC) to mitigate further the active community spread of the country’s COVID-19 pandemic.

The stakeholders while calling on the CH Coordinating agencies to  develop and implement practical actions to further communicate the outcome of the CH analysis at various levels of government to trigger and guide appropriate responses for addressing food and nutrition challenges, said partners should sustain the joint support for Food and Nutrition Security assessments’ timely conduct to ensure data provision for the CH analysis, particularly in inaccessible areas within the northeast states and other states or communities experiencing banditry and form of security challenges.