Institute of Church and Society sets agenda for Buhari, govs 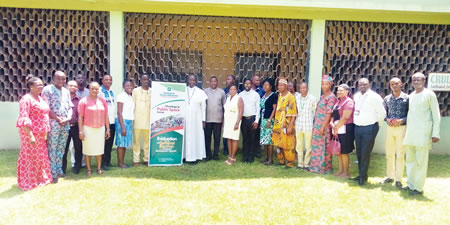 The Institute of Church and Society (ICS), has advised the new administration to focus on key areas that affect the welfare of the people.

This formed part of the resolutions at a forum tagged: Evaluation of 2019 Elections and National Development Agenda, held at the headquarters of the Institute at Samonda, Ibadan, Oyo State, on May 27.

It featured discussions on the 2019 elections, recommendations on future elections, setting an agenda for the new administration sworn in on May 29.

Speaking on behalf of the CCN chairman, South-West zone, Very Reverend E. O. Akande thanked God for the success of the 2019 elections and commended the efforts of stakeholders, including election observers.

He prayed for good tidings for Nigeria as the new administration settles.

In his remarks, Very Reverend Kolade Fadahunsi, the ICS director, urged the new administration to focus on finding solutions to “pressing economic and social challenges,” adding that the event, held under the ICS Theology in Public Space series, was an “important exercise to help propel major stakeholders into actions to safeguard the future, especially the 2023 elections.”

Delivering the address of the CCN Chairman of the South-West zone, Reverend Segun Babalola called for more efforts to improve the standard of living of Nigerians.

Representing Mutiu Agboke, the Resident Electoral Commissioner (REC) of Oyo State, Mr. Akanji Olajide, highlighted the achievements of INEC under the chairmanship of Professor Mahmood Yakubu, adding that 32 election petitions have been received for Oyo State.

Comrade Adewumi Faniran, Chairman of the Nigeria Union of Journalists (NUJ), spoke on the role of the media in the 2019 elections. Scoring INEC “very high” on enlightenment and especially the Oyo REC for his cooperation with the media, he said: “Political parties are gradually waking up to their responsibilities and party supremacy is again coming to the fore. The media isn’t complaining but we need enabling environment to thrive.”

In her address, Mrs. Jadesola Ajibola, the NAWOJ Chairperson, stressed that collaborative efforts among citizens, INEC, the media, CSOs, religious organisations, helped to make the polls a success, and urged politicians to keep the promises made to improve the lives of the citizens.