Inside Osogbo Artists’ Village of rot 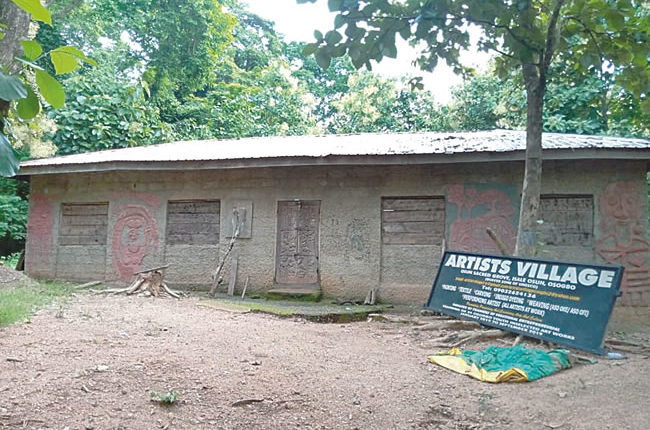 Despite its huge potential, the Osogbo Artists’ Village, which was set up to serve as a melting pot for notable artists in Osun State, now groans under neglect. TUNDE BUSARI reports the level of the practitioners’ frustration.

Unknown to many tourists to the Osun Osogbo grove, which hosts the Osun Osogbo festival annually, another tourism product sits somewhere in the northern part of the tropical forest, where the history of Osogbo started. The site is known as Artists’ Village.

It is a place designed for the purpose of bringing professionals who are into carving, sculpture, painting, cement work, brass work and tie-and-dye together in the same environment to boost recognition and ultimately the sale of their works.

However, the objective is currently suffering a major threat with the derelict state of the village in terms of attention and projected patronage. To access the village from any part of Osogbo, the Osun State capital, requires endurance given the state of the road leading to the place from Isale Osun.

A first time visitor must be determined to continue his journey to the site tucked inside the forest where animals are preserved in conformity to the United Nations Educational, Scientific, and Cultural Organisation (UNESCO)’s recommendation while turning the Osun grove into a World Heritage Site in 2005.

Nigerian Tribune gathered that UNESCO had outlawed hunting for animals in the grove as a way of preserving its ecosystem, a condition that is being respected to the letter by the people of Osogbo.

However, artists seem to be unrelenting in sustaining the vision for which the immediate past Ataoja of Osogbo, Oba Iyiola Oyewale (Matanmi III), who joined his ancestors in 2010, approved the site for a group of senior artists who shared the proposal with him.

Led by an Osogbo iconic painter, Chief Jimoh Buraimo, the artists, which included the current Eesa of Iragbiji, Chief Muraina Oyelami, accompanied Oba Oyewale to the site where he reportedly offered prayers for prosperity and expansion that would complement the cultural status of Osogbo.

Oyelami, a painter of repute who made his fame in Osogbo, attested to the Ataoja’s demonstrable love for the Artists’ Village during his inspection which formally turned the dream of many artists of such a village into a reality.

“The Ataoja really showed interest in that project and followed us to the site where he prayed for us. He did not stop at that, he also donated a sum of N250,000 for the commencement of work. With that amount, we knew that he was passionate about seing the project take off and also bring people to Osogbo in his life time.

“Unfortunately, he passed on. In fact, whenever I remember the role Kabiyesi played, I feel emotional about the place not reaching the potential we actually wanted it to. But we thank God for what has been achieved so far. At least, the place is being used now by artists who are showing seriousness to make it work,” he remarked.

Making the village to work has not been a tea party, going by the artists’ experiences. They daily report their frustration considering the state of things at the village.

For instance, women who are into tie-and dye, according to a source, experience some hardship occasioned by ridiculously low patronage of their fabrics. It was learnt that the women are a generation of hardworking folks with promising future in the arts should the condition of the village be improved.

“I am not always happy seeing those serious women producing those clothes but recording low sale. But I make it a duty to always buy from them in order to encourage them because if we don’t encourage them, they may decide to abandon the work; and if they abandon the work, it means tie-and-dye would become history one day. Just imagine what they do in Abeokuta. People go to Abeokuta because the market is organised for the artists at Kuto, whereas our works here are far better,” the source said.

An Osogbo-based artist, Chief Isiaka Azeez, is, however, optimistic that the village will survive its current travail going by the positive response received by a delegates of artists to the Osun State government secretariat, Osogbo.

According to Azeez, the artists’ delegates met with a top government functionary who gave them an audience on the possible intervention by the state government, as regards the state of the road leading to the village.

He recalled that the decision to pay a visit to the Osun State seat of power came up after the artists had thought of different options on how to draw government attention to their problems.

“I am happy to say that they listened to us. It means there is hope that our prayers will be answered one day because it is not a project that a local government can handle. We are looking up to them to help us. If they help us, we are going to use the village to further promote the name of the state as home of arts and culture.

“It is not good to have a crop of talented people who are so passionate about their jobs but who are not made a priority. This country is blessed with talents and other resources which can make us rely less on oil revenue. What our governments at all levels need to do is to look inward and explore those areas,” he said.

Another bright future for the arts village was seen in the special recognition which the American Embassy accorded the place in its youths’ empowerment scheme. It was learnt that the embassy chose the village as a centre where some select youths were taught the fundamentals of arts.

Incidentally, Azeez, who is the proprietor of the famous MAO Art, was one of the resource persons engaged by the embassy to train the youths. The outspoken artist gave kudos to the embassy for its genuine concern about development of arts, expressing his satisfaction at the attitude of the youths to the training while it lasted.

He said his observation during the three-month training revealed a genuine love for their artworks by the foreigners who, according to him, could have diverted their interest elsewhere. He, therefore, expressed his readiness to always make himself available for such exercise to impart his knowledge to the younger generation.

“What I realised was that the whites are more interested in our arts than our people and it should not be so. The Chinese will choose their products over any other person’s. That is why they are penetrating every nation today. They believe in themselves first before they believe in others. Unfortunately, we believe in what others bring here more than what we produce here by ourselves. That is one of the reasons this country remains on the same spot. But because we don’t have any other job, artists are going to make such impacts,” he assured.

He also attested to occasional excursion to the Artists’ Village by students of different schools where they are usually shown different items, noting that he built his interest in art as a student at St. Charles Grammar School after which he devoted the rest of his life to the vocation.

To younger artists, there is hope in sight. According to the proprietor of Bastuter Modern Art Studio located at Ibokun Road, Osogbo, art is the expression of all colours of life, hence his investment in it.

“We are motivated by our leaders who still show us the way despite our individual independence,” he said.

As Governor Bello leads war against insecurity in North