Inside details of Kara market fire disaster: ‘They offered to help move my TV, radio, clothes, other belongings to safety but they stole them all’

•Nothing mysterious about the fire disaster —Ogun fire service official 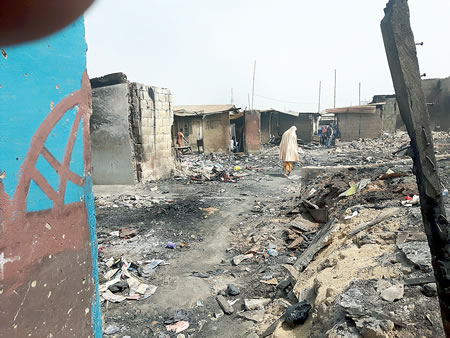 THE fire disaster of December 31, 2019 that affected a section of the Kara cattle market, situated along Lagos-Ibadan highway, left in its trail, destruction and hopelessness. It consumed valuable items and threw many into despair. The victims have continued to count their losses. One of those bearing the brunt of the inferno is one Ismail. Having lost all he laboured for to the fire, the 45-year-old menial worker and father of three children – two boys and a girl – leaned his back on the walls of the remnant of the building which once served as his residence, enveloped in the dust-laden harmattan and gazed into the space.

Unlike other victims whose properties such as car, shops, storage facilities, animal feeds and food items were directly lost to the inferno, not a single of Ismail’s properties was destroyed in the fire which the Kara cattle market leader, Alhaji Akeweje, said started mysteriously from a wooden house. Still, Ismail lost everything he had sweated for as a result of the ravaging fire which started around 10.00 a.m. in the early hours of Tuesday, the last day of the year 2019.

Except for the plain white T-shirt with a black trouser he had on, thieves who disguised as rescuers and offered to help fetch all his belongings – television set, radio, bedspread, wristwatch, clothes, standing fan and other home appliances – to safety, stole all the items.

The distraught Kaduna State indigene spoke to Saturday Tribune: “Since I came from the North some years ago to reside in Kara cattle market, it took me years of hard work, day and night, to acquire all the properties that were stolen in a jiffy. I wasn’t the cause of the fire but I was made to pay severely for a crime I did not commit. Everything I had was stolen by people pretending to be rescuers who offered to help me move it to safety. But in spite of the loss, I am grateful to Allah that my wife and children were unhurt in the process.”

To many road users, traders and residents, Berger and Kara cattle market axis of the Lagos-Ibadan expressway is notoriously known for robbery attacks and other crimes.

Reacting to the theft of Ismail’s properties, a meat seller, Bolaji Omoaje, told Saturday Tribune that thieves who operate in the market are the same persons are in the habit of taking to the road at night and dispossessing motorists and passers-by of their belongings and fleeing back into the market. Omoaje, an Oyo State indigene, said there was an urgent need for the police to comb the market and fish out the bad eggs among the traders and residents.

He said apart from the sales of livestock and perishable commodities, Kara cattle market is known to serve as a haven for criminals who unleash mayhem on traders and residents in the market.

From the Lagos end, on how to protect lives and properties of residents, the Lagos State Commissioner of Police, Mr Hakeem Odumosu, said gridlocks in different parts of the state and the attendant traffic robbery incidents remained a big challenge. According to the commissioner, who spoke at a press briefing on his achievements since he assumed office, efforts have been intensified by the command to decongest affected roads and clamped down on criminals terrorising motorists on Lagos roads.

On its efforts at stemming the ugly tide of armed traffic robbery and rid Kara market of criminal elements and make it safe for trading activities, the Ogun State police command’s spokesperson, Abimbola Oyeyemi, called on stakeholders in the market to partner and cooperate with the police in its fight against crime. Oyeyemi, in a telephone interview with Saturday Tribune, disclosed that people who are familiar with the market are responsible for thefts and robbery attacks on the residents and traders. He said the police required adequate information from leaders of the market as well as traders to enhance their performance.

He said: “Apart from the normal patrol of the market which we engage in, our men frequent the market to ensure that trading activities go on smoothly. I don’t see any breakdown of law and order in the market except that traders and residents in the market are culpable themselves.

“There is the need for them to partner and cooperate with the police because most of the people that are involved in these robberies are part and parcel of the market. They are people who know the market very well. So, the police require adequate information from the market leaders and traders to enable us perform our duty optimally.

“We cannot all sit and fold our arms and say we are minding our business. You cannot mind your business alone. As far as security is concerned, in minding your business, you mind other people’s businesses, too, because that other person’s business you don’t mind can jeopardise your own business and peace of mind.

“Security is everybody’s business. So, traders in Kara market should give us useful information whenever they notice any gathering they feel is inimical to the peace and tranquility of the market. This will make us serve them better.”

A visit to the market by Saturday Tribune suggested that normalcy has returned to the place. The market attracts hordes of people who move in and out droves.

As unpleasant smell from animal dung rent the air in the market’s characteristic manner, herd of cows graze through the grassy path in the market, passers-by feed their eyes on the ruins of the burnt section while flock of sympathisers condole with the victims. A few meters away, grocers and shoppers were constantly seen shifting positions and bargaining for best prices on communities such as tomatoes, pepper, local rice, beans, beef, goat, seasoning, spices and more. Mesmerising traders and onlookers with electrifying dance steps by the roadside was an itinerant trader whose sonorous voice boomed from a hand-held public address system. He was informing prospective buyers of the benefits of using his locally made herbal mixture.

But in the midst of everything, some questions beg for answers: was there any mystery behind the fire? Was it due to human error, it is a case of arson as alleged in some quarters?

To unravel the alleged mystery behind the inferno, Saturday Tribune embarked on a tour of the market to investigate its immediate cause. 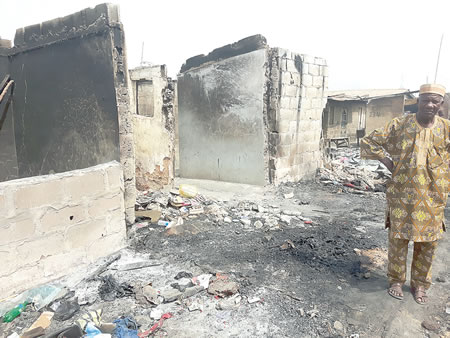 Was there truly a mystery to the fire?

Responding to the above question, Kara cattle market leader, Alhaji Adewale Akeweje, said it was beyond human comprehension as only God knew the cause of the fire which started suddenly and destroyed, in a few minutes, properties worth millions of naira.

“There is nothing that suggests that it was the handiwork of our detractors or caused by electrical spark. In fact, there was no electricity supply to the market on that fateful day. It was gathered that the fire started suddenly. As regards how it started, traders who were at the scene said they didn’t know. We have constituted a panel of inquiry consisting of market leaders to find out the cause of the fire and what needs to be done to prevent a recurrence,” Akeweje disclosed.

Nothing mysterious about the fire –Trader

Regarding the cause of the fire, an eyewitness and trader in the market who identified herself simply as Mama Ola said there was nothing mysterious about it. Giving an eyewitness’ account, she said the fire started from a wooden house which suffered a generator explosion. “The fire started with an explosion from a generator. I was at my trading spot directly opposite the affected scene attending to a customer when I saw a man step out of his room with a five-liter gallon of petrol.  While the generator was on, he attempted pouring petrol in the tank. As he was doing this, the generator exploded and he ran away. Since there was nobody to put it out, the fire spread to other rooms and storage facilities,” she said.

Also, a director at the Ogun State Fire Service, Fatai Adefala, said there was nothing mysterious about the fire incident. Adefala disclosed that the compact nature of the market contributed to the fire incident as there were no exit routes for timely salvaging of properties.

He said: “We have advised traders in the market time and again to ensure that there is water mill in the market in case of a fire emergency. They should also ensure there are emergency exits in the market. Stalls in the market are too compacted and as a result of this, we encountered problems in gaining access to the market. The government has promised to purchase more fire-fighting engines to cover the gap so that our response would be rapid.

“We discovered that the fire started accidentally. The fire started from a house and it affected so many properties. This is harmattan when fire spreads more rapidly. I want to urge all residents to put off their electric circuits, cooking gas cylinders and other home appliances before leaving their homes. Bush burning should also be controlled and restricted. And for those that smoke, they should ensure that the cigarette butt is dislodged appropriately.”

Travel ban: ‘Infiltrators will be sent back home, won’t be allowed to…