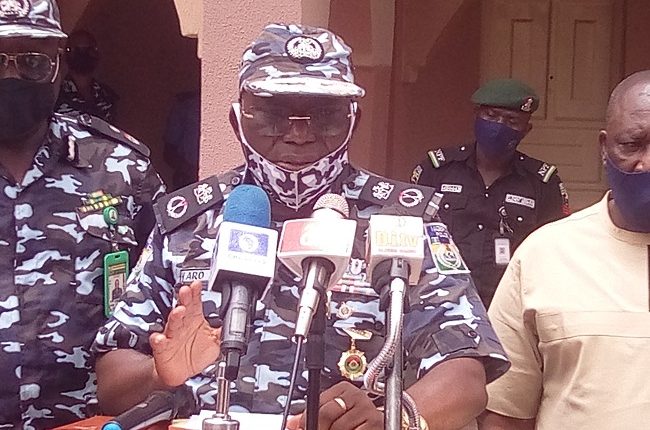 The Zamfara State Police Command in its determination to rid the state of criminal elements and their collaborators has arrested six suspects including gunrunner, recovered N1,070.000, an AK-47 and hard drugs in the state.

Addressing newsmen at the police command headquarters in Gusau, the commissioner of police, Mr Abutu Yaro disclosed that all the suspects are in police custody undergoing discreet investigation.

He revealed that on 17th March 2021, a team of policemen attached to Operation Puff Adder II in Tsafe Local Government Area received an intelligence report that a strange person suspected to be a bandit was seen at the outskirt of Biyabiki village.

“Operatives in collaboration with the vigilante group of the area quickly mobilized to the scene and arrested the suspect who was in possession of AK-47 rifle and magazine with two (2) rounds of live ammunition.”

According to the CP Abutu, a suspected armed robber, Murtala Yusuf Funtua was arrested with a ‘boxer’ motorcycle and deadly sharp iron.

“On 14th March 2021, the suspect who came all the way from Funtua in Katsina State to Zamfara to perpetrate an act of criminality was arrested by our men of Operation Puff Adder II after an alarm was raised by the victim who happened to be an Okada man conveying the suspect from old market to Janyau area, Gusau.”

He said on reaching the destination, the suspect who was armed with a deadly sharp iron inflicted injury on the victim’s right hand and also poured some powder-like substance into his eyes thereby blinding the victim before robbing him of his motorcycle.

Also, two suspects, Aminu Mohammed, Nnanna Uchenna have now been arrested for allegedly aiding and abetting banditry through the supply of hard drugs to bandits and operating unlicensed medicine store in the state.

“On 10th March 2021, Police operatives in Shinkafi acted on credible intelligence and arrested the suspects both residing in Shinkafi town. The two (2) suspects were apprehended after series of complaints by Shinkafi communities that, the duo have engaged themselves in the supply of hard drugs and injections to the bandits in the bush through one Buzu ‘M’ now at large.”

He said one of the suspects, Aminu Mohammed who happened to be the middle man in the business was arrested with one hundred (100) bottles of pentazocine injections collected from Uchenna Nnanna while delivering to the said Buzu.

“The injections according to the pharmaceutical analysis conducted by a medical expert is used to treat moderate to severe pains for adult and children, it is also used as part of anaesthesia for surgery.”

The CP further revealed that a gunrunner, Ibrahim Adamu was arrested with one million, and seventy thousand naira meant to purchase AK-47 rifles while Tsoho Dandela and Dogo were at large.

“On 18th March 2021, the Police command arrested one Ibrahim Adamu ‘M’ aka Gado after credible information revealed that himself and one Tsoho Dandela, all bandits from Kangon Marafa village of Bungudu local government area concluded plan to purchase AK-47 rifles from one Dogo, a notorious armed bandit residing in a bush under Zurmi LGA.”

He said police operatives mounted a monitoring squad which led to the successful arrest of one of the suspects with the cash sum of one million, seventy thousand naira (N1,070,000) meant for the purchase of the arms.

“During interrogation, the suspect confessed to have collected the money from Tsoho Dandela and be taken to Dogo in Zurmi, an investigation is in progress and aimed at apprehending other suspects and their partners in crime.”

“On 18th March 2021, Police operatives attached to Operation Puff Adder in Tudun wada Division acted on credible intelligence that led to the arrest of one Abubakar Mohammed ‘M’ of Falaila GRA area, Gusau in possession of a large quantity of dry leaves suspected to be Indian hemp and other hard drugs which are being used by bandits and other criminal elements.”

The CP said the suspect during interrogation confessed to have engaged himself in the buying and selling of dry leaves and other hard drugs.

The Police Commissioner maintained that all the suspects were in police custody undergoing further interrogation and investigation before being charged to court for prosecution.

The surprise visit made on Friday night by the leaders of the ruling All Progressives Congress (APC) to former President Goodluck Jonathan at his residence in Abuja triggered a stir in the major political camps, resulting in at least four possible theories…Police arrest gunrunner Police arrest gunrunner