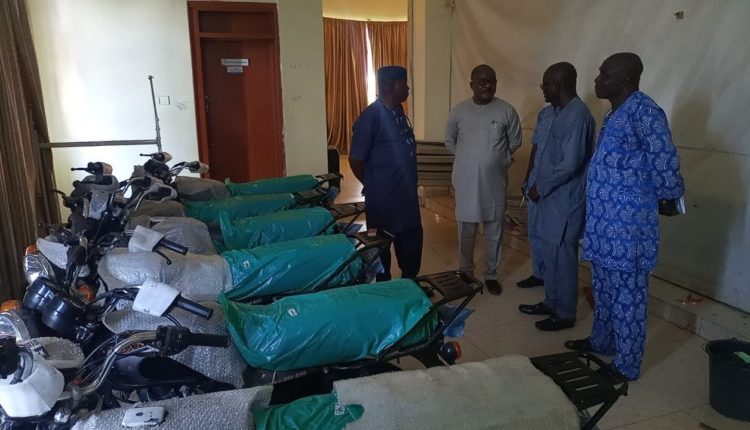 The Bunu-Ijumu-Kabba Yagba(BIKY) club has donated 6 motorcycles to aid local policing in the five Local Government Areas over the rising insecurity in the area.

The Motorcycles were presented by a member of the Club, Mr Funso Fayomi on behalf of the President, Mr Funsho Fatobi to the leadership of Okun Development Association (ODA) in Lokoja, the State Capital.

According to him, the current security challenges including, kidnapping, armed robbery and farmers-herders clashes in Okun land necessitated the presentation of the bikes.

Fayomi explained that the donation was also part of the commitment of the club in identifying with the good works the ODA has been doing to motivate them to do more.

He stated that the gesture was aimed at giving back to the entire Okun communities, saying the ODA is a veritable group to partner with for the safety and development of the Kingdom.

He noted that the motorcycles are to be shared among the five local governments in the Yoruba-speaking part of the state, assuring more support for the club.

He added that the club was established in the 80s with like-minded Okun sons and daughters within and outside the country and is concerned with the development of Okun land and youth empowerment.

The President of ODA, Barr. Femi Mokikan, represented by the Vice President, Mr Kunle Tayo, who expressed delight over the donation, said the club is the first group in Okun land to support the association in its drive to make the area safe.

While describing the move as thoughtful and a step in the right direction, the ODA President urged individuals, groups and corporate bodies to emulate the BIKY club in its bid to make the area a better place.

On his part, the head of local hunters in Okun land, Mr Ibrahim Tunde said the motorcycles will enhance community policing as they are more effective for fighting crimes and criminality.

Atiku decries worsening case of insecurity in the North-East