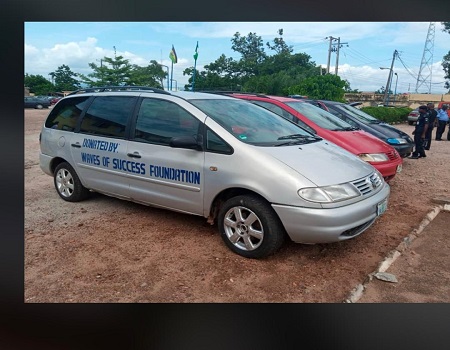 Following the prevalent insecurity challenges being touted in all quarters of the country, Mr Ocholi Okpanachi Yusuf through his Non-governmental Organization (NGO) Wave of Success Foundation, donated some patrol vehicles to the Kogi State police command to boost their effectiveness.

The number of violent crimes such as kidnappings, armed-robbery, carjackings, religious killings, politically-motivated killing, ethnic clashes, armed banditry and others has increasingly become the regular signature that characterized the nation.

This gesture from Mr Yusuf is targeted towards easing the vehicular movement of security operatives in the fight to contain this deadly monster threatening the State.

While presenting the vehicles to the Kogi state Commissioner of Police, Ede Ayuba Ekpeji, he stressed the need for other stakeholders to work in synergy with government via inclusive and creative ways of addressing and de-escalating this complex conflict through empowerment, revival and reinforcement of moral values with virtues within the socio-economic, political, religious and educational institutions in the state and the country at large.

He also pleaded with leaders, politicians and their subjects to evince and uphold moral values and virtues in all their conduct in order to lead by example and to avoid heating up the polity unnecessarily by their conducts and comments which sometimes incite violence in their followers.

His words: “at this time, the government should not just focus on security but also invest in peace-building, reconstruction and rehabilitation of socio-economic development”

While responding, the Kogi State Commissioner for Police said all vehicles will be put to use accordingly, he also called on all well to do individuals to come forward and assist the Nigeria Police Force by contributing their own quarter to the fight against insecurity.