• Mum on fate of service chiefs 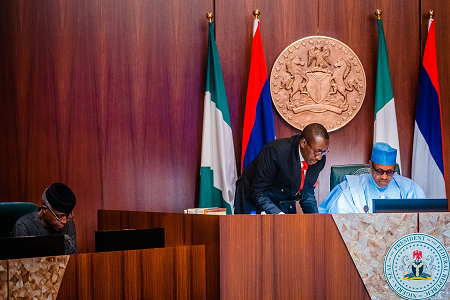 Barely 24 hours after the House of Representatives resolved that the service chiefs should be fired, President Muhammadu Buhari presided over a meeting of the National Security Council to seek new ways out of the burgeoning insecurity in the country. 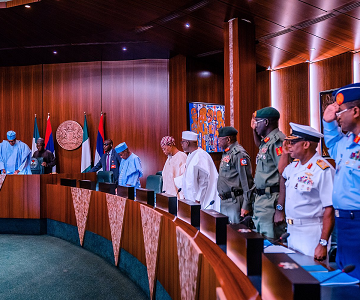 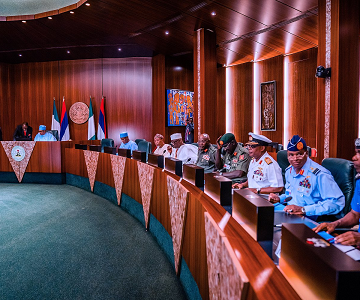 Monguno, who briefed State House correspondents at the end of the meeting, said it resolved to seek cooperation between government agencies and the larger society including states and local governments to tackle insecurity in the country.

The NSA said the issue of the call for service chiefs resignation did not feature on the agenda of the meeting.

He said: “The meeting basically made an appraisal of the current security situation in the country and took a look at the possibilities the opportunities available to government in addressing most of the recent challenges.

“There was discussions and at the end of the day, the most important thing that we came up with is the need to for collaboration both between governmental agencies and the larger Nigerian society because of the type of the insurgencies we are faced with, the complexities, the multiplicity of all kind of issues.

“There is a need for both parties, governmental agencies on one hand and the larger society to collaborate more vigorously.

“There is a need for us to deal with these problems in a comprehensive manner.

“Therefore, council has decided to take a closer look at issues that will help us not just at the federal level or at the state level, but right down to the local government level. But this is going to be done after due consultations with the relevant stakeholders.”

Asked to give the specifics of the collaboration sought, he said: “The issue of collaboration, it’s not something that I can disclose right now.

“We just concluded the meeting and we have to look at the issues before coming out with whatever decision.

“For collaboration, I want to think that everybody understands the need for a whole government approach in collaborating with the whole of society approach to achieve a lot.

“This situation requires everybody in the country to work together to deal with these challenges. So, where there are gaps we need to close these gaps. That is what I mean by collaboration.”

On the resolution passed by the House of Representatives asking Mr President to relieve the service chiefs of their appointments, Monguna simply said that it was not discussed at the meeting.

Gbajabiamila urges Nigerians to use religion to promote unity