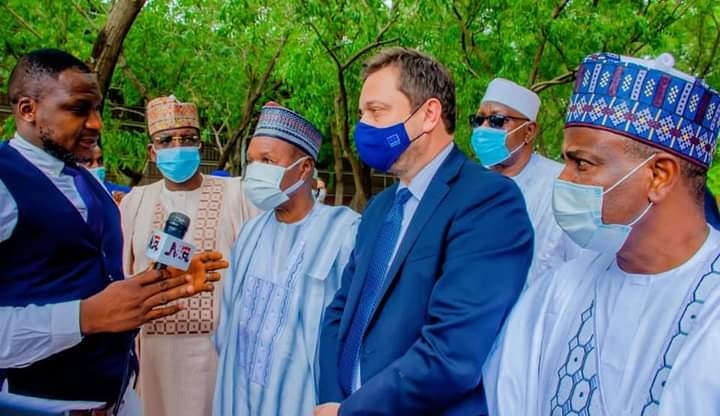 In their collective bid to halt the spate of banditry, kidnappings and violence in the North-West geopolitical zone, three governors from the region on Thursday met and sought the assistance of the European Union (EU), the United Nations (UN) and some Western countries, including the United States of America, UK and Canada.

The meeting which held at the EU compound in Abuja had in attendance Governors Aminu Bello Masari, Aminu Waziri Tambuwal and Bello Muhammad Matawalle of Katsina, Sokoto and Zamfara State respectively.

This was contained in a statement issued by the Special Adviser on Media and Publicity to the Sokoto state governor, Mohammed Bello on Thursday.

The EU ambassador to Nigeria, Ketil Karlsen said the meeting discussed the insecurity in the region, the regional dimensions of the conflict, the influence of the Sahel conflicts and arms proliferation.

According to Karlsen, “we all have programs already on the ground in the North-West. We have humanitarian programs and development cooperation. We also engage in political discussion at federal, state levels and civil societies.

“We are very pleased to add our contribution to finding durable solution to ending kidnappings, violence and making sure that the social fabric, which has been broken in some places, is reestablished; making sure that there’s access to better education in place for all, proper social services in place, such as healthcare as well, because all of these issues are part of finding long term solutions,” he said.

He observed that “the main solution has always come from within- having solid and comprehensive support from federal-level combined with local engagement with the impacted communities is absolutely the key.”

He also noted that the EU and its partners are already providing support and assistance to the North-West and hope to establish more opportunities, “because we know that this is what is needed to have a durable solution by the end of the day.”

He added that the international community currently “have assistance also for the National Livestock Transformation Plan (NLTP), but pointed out that although the implementation has started, “making sure that words are transformed into concrete action on the ground, is vital.”

Once these are accomplished, Karlsen further added, “then the international community can assist as we have done in the past.”

In his remarks, Gov. Tambuwal said the high-level meeting was a coming together of friends “to discuss, engage and get first-hand information from those of us who are hands-on in our respective states on this issue to know how best we can help and support the Federal Government of Nigeria in resolving these issues.”

He emphasized that the governors “are interested in the support that we are likely to get from them to our federal government to solve this problem.

On his part, Gov Aminu Masari of Katsina State also corroborated what Tambuwal had said. According to him, “we also solicited for more support from the EU and we expect that results will come very soon.

Also, Gov Bello Matawalle of Zamfara State also told journalists after the meeting that he was confident that the international community is ready to assist the three states and the region, to end the insecurity which has bedevilled the region.