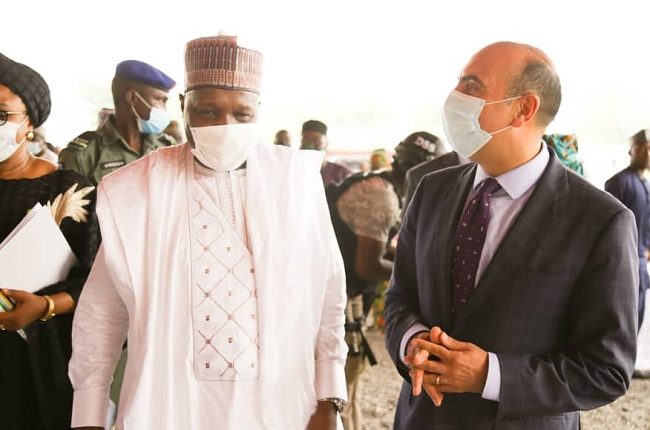 Gombe State Governor Muhammadu Inuwa Yahaya has said that the security situation in the country is getting out of hands stressing that it requires the highest level of capacity in intelligence gathering and surveillance to be able to nip the ugly monster in the bud.

The Governor stated this while speaking at the closing ceremony of the Special Intervention Squad (SIS) Course, Batch 6 at the National Institute for Security Studies, NISS, Lower Usman Dam, Bwari, Abuja.

The Governor, who was the special guest of honour at the occasion, lamented the security situation in the country, advising that the challenges must be taken within the broader context of insecurity in the Sahel, sub-Saharan Africa and the entire globe vice versa the proliferation of weapons in conflict areas like Libya and Mali among other troubled spots in Africa.

The Governor also said that his decision to attend the closing ceremony of the Special Intervention Squad Course was predicated on the fact that he is from the North East which is the sub-region that is currently facing the greatest security challenge.

He declared that “I am here not only at the prompting of the invitation I got alone but also as a leader from the sub-region that is facing the greatest challenges of our time in terms of insecurity.”

Inuwa Yahaya added that “If I tell you that I sleep with my two eyes closed as a Governor I think I must be joking because the security situation in the North East is so disturbing and worrisome that it needs a concerted effort and cooperation of all stakeholders- from the administrators to the operatives, so as to move forward and close the gaps.”

He described the training as apt and timely, saying, “I think that is what necessitated this training for your operatives.”

He further explained that being at the centre of the North East, Gombe State is faced with the fall out of insurgency in contiguous states such as the influx of Internally Displaced Person, IDPs and the rising threat of criminal activities.

“We are a small state of about 3.5 million in population but because of the insurgency in the region, a lot of people have come to settle with us and put a stress on our hospitals, educational and institutional resources and even the social fabric. And you can imagine what it is for you to have people that you don’t have records of. To some extent and in this regard, we must appreciate the role of the DSS and in particular, we appreciate what the Director, State Service in Gombe is doing. He is doing a commendable job,” the Governor said.

The Governor, however, said that despite the prevailing security challenges rocking the North-East sub-region, Gombe State remains largely peaceful, praising his administration’s inclusive and community-driven approach to security.

Inuwa Yahaya also said that the State Government under his leadership is doing everything necessary to safeguard peace and stability for which the State is known for.

He declared that “In Gombe, we adopted a bottom-up security model starting from the community and ward units up to the state level, carrying all relevant stakeholders like traditional rulers, religious and community leaders along”.

He also said that his administration created the Ministry of Internal Security and Ethical Orientation to foster peace and harmony through a community-driven security framework, adding that an initiative is underway at the sub-regional level to deepen cooperation among the six states of the North East.

While thanking the Department of State Security Service for its cooperation and commitment in quelling the recent crisis in Billiri Local Government Area of the state, Governor Muhammadu Inuwa Yahaya pledged his government’s commitment to partnering with the service and other security agencies.

He congratulated the participants for successfully passing through the rigours of training and called on the Federal Government to invest more in training, funding and equipping of the nation’s security forces to better prepare them for any eventuality.

Earlier, the Director-General, State Service, Yusuf Magaji Bichi who was represented by the Director, Economic Intelligence of the service, Dr. Olufunke Amos charged the course participants to put in practice the knowledge acquired during the training, just as he asked them to remain disciplined, loyal and committed as demanded by the ethics of the profession.

In his remarks, the commandant of the institute, Alhaji A.S. Adeleke appreciated Governor Muhammadu Inuwa Yahaya’s disposition towards ensuring peace and security, not only in Gombe state but the North East and the country at large.

He particularly commended the Governor’s handling of the recent security breach in Billiri local government area of the state, describing the approach adopted by Governor Yahaya in calming the situation as highly commendable.

“His Excellency is a man that is security conscious. You have invested heavily in security and we also appreciate the way you handled the recent issue in your state. This is highly remarkable and commendable.”

He said the service is concentrating on training younger elements within its ranks to confront the numerous security challenges both nationally and globally.

He explained that the 58 participants were carefully selected and trained on various tactical operations, including timed reaction and target precision, VIP evacuation, marksmanship, unarmed combat among others.

Egyptian Ambassador to Nigeria, Amb. Ihab Awad who also graced the occasion commended the Institute, saying ” what I have seen today is nothing short of excellence.”

The British Parliament at the Westminster Hall held a debate on ‘e-petition 554150, relating to Nigeria and the sanctions regime’ on Monday. The government of the United Kingdom has however responded…I don’t sleep  I don’t sleep

The surprise visit made on Friday night by the leaders of the ruling All Progressives Congress (APC) to former President Goodluck Jonathan at his residence in Abuja triggered a stir in the major political camps, resulting in at least four possible theories…I don’t sleep  I don’t sleep I don’t sleep

‘My brother got him a job in a bank, then he slept with my friend –Wife