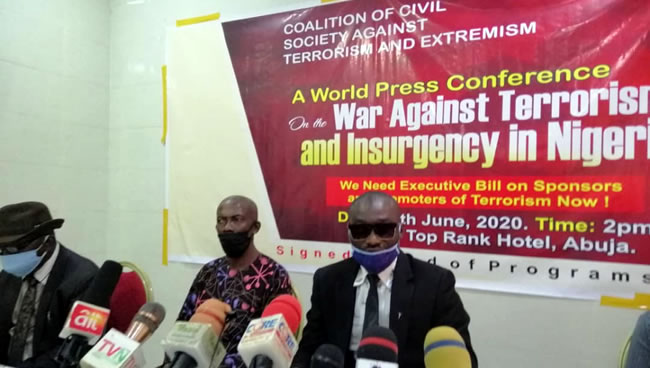 The Coalition of Civil Society Against Terrorism and Extremism (CATE) has implored President Muhammadu Buhari to sign an executive order into law that will allow law enforcement agents arrest and prosecute sponsors and collaborators of terrorists.

CATE believes this is the final nail on the doomed Boko/ISWAP’s coffin, especially with the troops’ recent impressive outings.

Like the strategy deployed in the war against corruption, the coalition noted that a swift arrest and prosecution of the perpetrators and those who aid such acts could potentially be the watershed.

Speaking at a press conference on Tuesday in Abuja, Secretary-General, Comrade Musa Moses, said that the order should be firm and clear, stipulating a maximum of 60 days for the trial of suspects without bail.

The group added that convicted persons should face a dealth penalty, same with others who carry out any campaign that helps to promote the act of terrorism.

The Coalition of Civil Society against Terrorism and Extremism, therefore, called on President Buhari to urgently empower the Attorney General of the Federation (AGF) to take up such cases until justice is done.

If this is done, CATE vowed that the troops can now concentrate on the remaining miscreants and flush them out within a very short time, thereby making a resounding and lasting success on the war against terrorism.

The war against terrorism in the country has been ongoing for more than a decade now, albeit with mixed mixed outcomes that recently swung in favour of the country as the Military dealt decisive blow after decisive blow on the terrorists. What has become clear to all as a result of this is the fact that our military have the upper hand and has gained better control of the situation with the terrorists on the way to oblivion.

When fighting any organism, it is important to target its life source. It is often the strategy adopted by animals especially the lion, when hunting its prey. The lion targets the throat of its prey in order to deny them further access to air and then terminate their breathing. They do not just start by tearing their prey into pieces but by first eliminating the prey’s ability to breathe.

Similar to the success strategy adopted by the king of the jungle, it is time Mr. President denies the terrorists the air they breathe. The air that sustains terrorist activities in the country is their sponsors. The sponsors of Boko Haram/ISWAP and other bandits are the equivalent of the air that sustains the breathing of these organizations, cut off the sponsors and watch the terrorist organization collapse within weeks before our great armed forces.

The military has done its part and it keeps doing even more in the battle against terrorism and other security challenges. In the process many times they have even had to pay the ultimate price with the lives of the men and women of the armed forces yet they remain undeterred they kept keeping at it.

There is no doubt that the terrorist and other criminals have been badly decimated and now operate from the fringes, however  It is time for the government to give the military the required backing needed to finally finish off these terrorists once and for all.

The fight against corruption would never have gained such traction had it not been for the swift arrest and prosecution of the perpetrators and those who aid such acts. It always important in the fight against any vices that government sends a clear signal on the consequences for such acts.

There needs to be similar vigor and dedication in the war against terror and other security challenges. Mr. President as a matter of urgency needs to sign an executive order into law that will enable law enforcement agents to go after the sponsors and collaborators of the terrorist.

This order must be firm and clear, let the executive order stipulate a maximum period of 60 days for the trial period for anyone involved in acts of terrorism anywhere in the country. Such persons or people should also not be eligible for bail. The acts of terrorism are serious offences that has caused the deaths of thousands of Nigerian citizens and even displaced millions of people from their homes.

Upon conviction, the laws should prescribe death penalty for anyone involved in terrorism activities such as cyber-terrorism or that carries out any campaign that helps to promote terrorism. All those engaged in financially supporting any act of terrorism or banditry should be made to face the full wrath of the law.

It is not enough to take people through the judicial process and then painstakingly prosecute them only for them to be slapped with some minimal jail term. This will only go further in emboldening the terrorist.

The government must now become ruthless with the sponsors and collaborators of these terrorist groups. They are the lifeline of these organizations that must be cut off completely for this war to be won once and for all.

We at the Coalition of Civil Society against Terrorism and Extremism calls on President Muhammadu Buhari to urgently empower the Attorney General of the Federation (AGF) to take up such cases until justice is done. This is a matter of national security that should be treated with utmost dedication.

Mr. President has to send the clear signal out there that there will be consequences henceforth. Let the message be clear that promoters, sponsors and collaborators of these terrorist organization will have no place in Nigerian society again.

Once Mr. President can do the above we assure you that within a matter of weeks the terrorist groups will begin to crumble. These sponsors who surprisingly have infiltrated many institutions are the real life of these criminals. They are the ones who provide them food in the name of humanitarian services sometimes hiding under the guise of being non-governmental organizations (NGOs). Sometimes they claim to be media consultants yet providing vital propaganda support for the criminals. They come disguised in all shades. It is time to go after them with full zeal and dedication and bring them to book.

If and when this is done our great men and women of the armed forces can concentrate on the remaining miscreants and flush them out within a very short time, thereby making a resounding and lasting success on the war against terrorism.