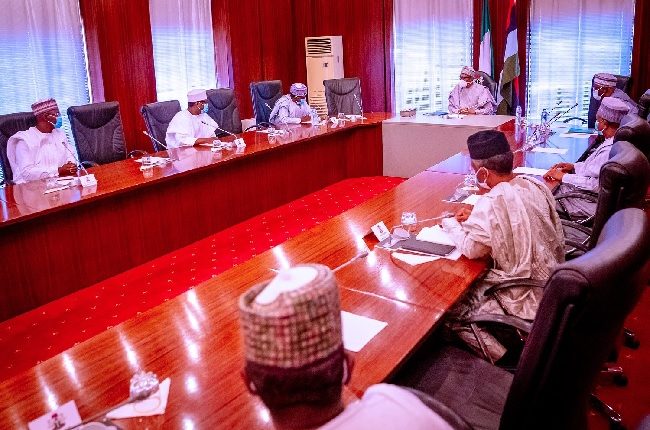 As part of ongoing efforts to stem the tide of insecurity in the country, President Muhammadu Buhari, on Thursday, met with some northern governors who he assured of his government’s commitment to tackle the menace.

Present at the meeting in his office at the presidential villa, Abuja also attended by the Chief of Staff to the President, Prof Ibrahim Gambari, were the governors of Kebbi, Atiku Bagudu; Kaduna, Nasir El-Rufai; Yobe, Mai Mala Buni; Niger, Abubakar Bello, and Nasarawa, Abdullahi Sule.

The governors briefed the president on the individual experiences of their states, what they have done to resolve the crises and what they expect the Federal Government to do.

Speaking to State House correspondents at the meeting, the Chairman of Northern Governors Forum, Governor Lalong who led the delegation, said: “Well, this meeting is in respect of some of the common features of insecurity that we have within our states.

“You will recall that many of the states have some of the insecurities that are very similar. So, we put them together and see how to address some of those issues. And we felt that we must also meet Mr President about it since it’s about the insecurity.”

On the key takeaways from the meeting, the Plateau governor added: “I think there are not to be disclosed because these are about security. But the take away I say is that the meeting with the President was very fruitful and we are also very committed, and we have seen a lot of commitment, so we are waiting for implementation.

“The assurance I will give you is that based on this meeting, we will also wait to see the commitment, and Mr President has given us that assurance.”

The 624 new cases reported between March 28 and April 3 is a reduction from the 849 recorded the previous week…Insecurity: Buhari meets northern governors