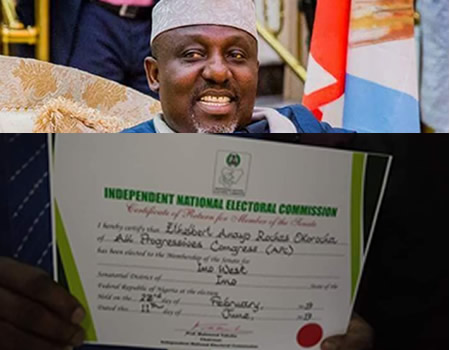 Former Imo State governor and senator-elect for Imo west senatorial district, Rochas Okorocha was on Tuesday handed his Certificate of Return in deference to last Friday judgement of a Federal High Court in Abuja.

Okorocha was denied his Certificate of Return by the Independent National Electoral Commission, over alleged physical assault of INEC Returning Officer for the Imo West senatorial election, Professor Innocent Ibeawuchi.

Professor Ibeawuchi, had alleged that he was forced to declare Governor Rochas Okorocha the winner of the poll by the supporters of the All Progressives Congress candidate.

Ibeawuchi had told newsmen in Owerri, Imo State capital, that he was held hostage by supporters of Governor Okorocha and because he feared for his life he had to announce the result which he claimed was inconclusive, because of the electoral fraud in eight local councils.

But Justice Okon Abang of the Abuja Division of the Federal High Court in his ruling declared that the decision to deprive Mr Okorocha of the certificate fell outside the provisions of the law and was, therefore, a “lawless decision.”

Justice Abang said only the returning officer of the INEC had the constitutional authority to declare a winner.

Speaking with newsmen shortly after collecting the certificate, Okorocha thanked the judiciary for its consistency in upholding the rule of law while he applauded INEC for what it called its bold gesture.

He said: “I received certificate of return by exactly 6.40pm today shortly after the inauguration of the 9th assembly. I take it to be God’s time and I have always believed that justice delayed is denied. But all the same, for the sake of our nascent democracy, I accept this certificate and I want to thank the judiciary for doing the needful and for having come up at the time they did as the resort for every downtrodden and common man in this society or for anybody that feels oppressed.

“I also want to thank the INEC for taking this bold step against all odds to issue me this certificate of return. It goes a long way to confirm that the allegation of duress was unfounded. This is a delay tactics by my detractors to slow down the process but I believe it is God’s time and I take it to be God’s time and I am happy that finally this matter has been resolved,” he said.

In an apparent reference to the cold war between him and the APC national chairman, Comrade Adams Oshiomhole, the immediate past Imo State governor insisted that nothing was wrong with the party but its administrators at its national secretariat.

“For that reason, I will not stop being an APC member because of somebody. I came into the APC alone, I am in the party and I believe in that. Suffice to say that time will tell and time will actually explain certain things unknown to us.”

He further expressed regret that he could not make it to the formal inauguration of the Senate.

“I would have wished to attend the whole proceedings of the inauguration, but now, I have missed it because I don’t have the certificate but now that I have been issued, I will join my colleagues to move the country to the next level,”

Alleged substitution of candidate: Tension at Buhari’s House as aggrieved…

2023: Your choice of candidate will jeopardise our chance, APC national stakeholders…