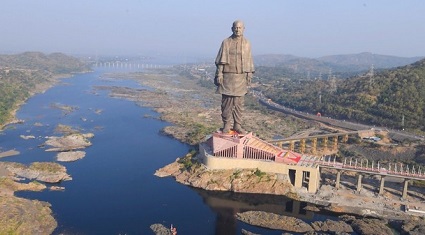 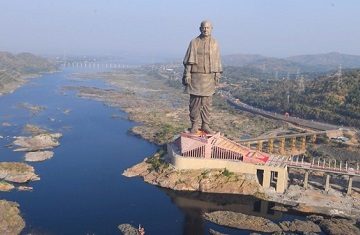 India on Wednesday unveiled the world’s tallest statue in the western state of Gujurat in celebration of her unity.

Towering at 182 meters, the Statue of Unity is a tribute to Sardar Vallabhbhai Patel, a hero of India’s freedom struggle and the country’s first deputy prime minister.

Patel, a Gujarati, was known as the ‘Iron man of India’ as he went about persuading all the princely states to join the Indian union after independence from British rule in 1947.

Prime Minister Narendra Modi, who also hails from Gujarat, dedicated Patel’s statue to the people of India on the 142th birth anniversary of the statesman’s birth.

The record-breaking monument, which towers over the Narmada River, was built at a cost of 29.89 billion rupees (430 million dollars).

Based on award-winning sculptor Ram Sutar’s creation, the statue was built by engineering firm Larsen and Toubro.

The bronze statue, which depicts Patel wearing the traditional Indian attire of a dhoti and a shawl, took 33 months to build and involved 250 engineers and 3400 workers, according to the Press Information Bureau of India.

“To build this statue, hundreds of thousands of farmers from all over India came together to donate their tools, portions of their soil and a mass movement developed around the statue,” Modi said in his speech.

Thousands of policemen guarded the venue during the inauguration, as local tribal people have been holding protests in recent months claiming the project had destroyed natural resources, the Times of India newspaper reported.

The 128-meter Spring Temple Buddha in China had previously held the record for the tallest statue.

Modi calls for calm as Delhi riots toll rises to 24