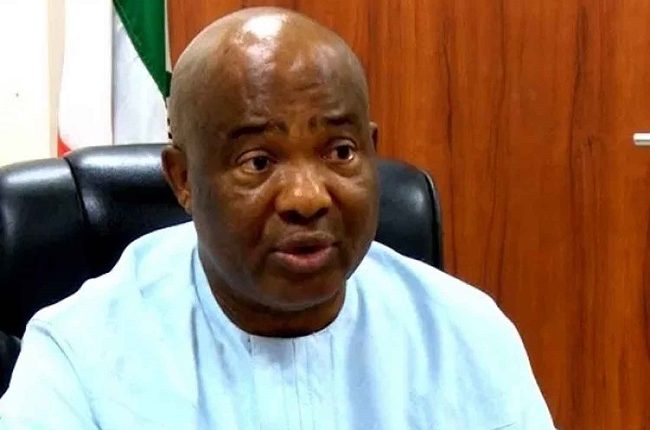 Governor Hope Uzodimma  of Imo State has threatened to crush whoever attempt to disrupt the peace of the state again, just as he extolled government’s determination to tackle insecurity through elimination of criminals.

Uzodimma, who issued the threat in his state wide radio broadcast on Friday evening gentlemen in Owerri to the people of Imo State, as parts of the activities marking the 61st Independent Anniversary of the country, pledged not to spare anyone found troubling the peace of the state.

“As government and people, we will crush them. Anybody who attempts to disrupt the peace of the state again may not live to tell the story,” the governor warned.

He advised parents and guardians to admonish their children and wards, warning that security agencies had been directed to deal decisively with those who might be tempted to foment trouble again.

Uzodimma recalled the just inauguration of judicial commission of inquiry in the state which duties it is to investigate the security breaches in the state and come out with recommendations on what government should do to ensure that there is no recurrence of such.

The governor expressed optimism that both the perpetrators and their sponsors would be unmasked for Imo people to know their enemies.

He called for collective duty of everyone towards the protection of the state against renegades, while urging people to assist the security agencies and government with useful information to enable them to take the war to the hideout of criminals and flush them out to face justice.

The Governor condemned in strong terms, the unrelenting activities of these elements in the state manifesting in banditry, kidnapping,and other forms of criminality, describing it as a set back to progress and development of the nation.

He said: “Unfortunately, we have had to contend with reactionary elements who want to sabotage the nation for purely selfish and political considerations. Trillions of naira which would have been used for development are being wasted in fighting insurgency and criminality. This is why both the perpetrators and their sponsors should have a rethink so as to release their stranglehold on our economy and advancement.”

Uzodimma urged the people of Imo State and South-East in general to use the occasion of the Independence to re-evaluate the recent activities of their youths as they relate to their relationship with other Nigerians, their economic growth and their future aspirations.

He said: “As a people who suffered the devastating consequences of a 30-month civil war, reason demands that we should be extremely circumspect in the pursuit of our agenda.

“I have said it repeatedly that we stand to benefit more in a united Nigeria where justice and equity define our group existence. As a people who are everywhere in Nigeria, we need to remain agents of consolidation, not division and destruction,” Uzodimma stated.

The governor said that Imolites could not afford to suffer in their own country, either  by their own actions or inactions, what their people were suffering in Ghana and other African countries.