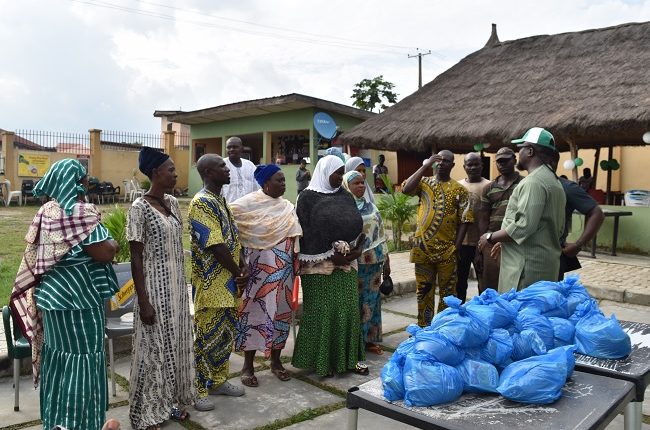 Some of the items donated include rice, salt and ingredients where over 30 people benefited from the programme.

Speaking, President of the Club, Mr Seyi Alaba, said it is necessary to assist the less-privileged and cater for their needs.

“Today is the 60th anniversary of Nigeria and at Rotary Club, this month is our month of economic and community development. As we all know that COVID-19 has affected a lot of families and households and we deem it fit that if we are celebrating the Independence anniversary as an individual and Rotarians, we should extend the good tidings to the less-privileged and to the people who cannot celebrate.

“And that is why we have come together to give out a kind of relief to members of our community. We have put out the resources to give food items to the less-privileged in our society like rice, vegetable oil, salt, etc.”

Also, a member of the group, Abiodun Oyeleke said the gesture is part of impacting the community in the Rotary organisation.

He said: “With the Independence of the country today, we decided to reach out to the people so that they can have some kind of little thing that will make them happy.

“This is just a token but we believe it will go a long way to make them happy on a day like this.”

One of the beneficiaries, Aliyu Isah thanked the Club for the gesture, saying it was commendable that “members of this esteemed organisation have put in their time and money to make us happy on Nigeria’s Independence day.”

I made Agboola Ajayi highest-paid deputy gov in Nigeria, yet he betrayed me ― Akeredolu