Increase in teenage rape, any end in sight? 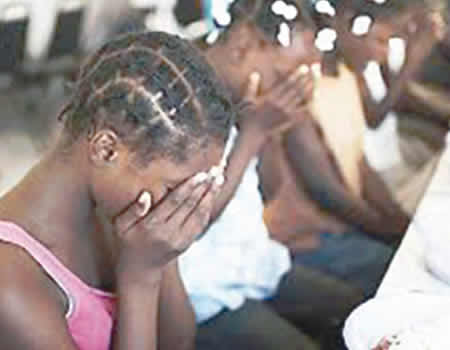 NIKE (surname withheld),  25-year-old nurse recently narrated her rape experience. In an emotion-laden voice, she explained how she was raped at age 12 by their gateman who at that period could not be less than 40 years old, adding that he threatened her against telling anyone and continued to molest her until he left their house. This affected her psychologically until she became an adult and sought help.

Nike is just one of many women who as a child had experienced sexual harassment in various forms Jola, another victim, was on her part molested by her uncle when she was eight years old. 23-year-old Nneka was raped at 10 by a distant relative who abused her for almost five years while she was too scared to speak out.

The three women, now adults, still live with the trauma of this childhood experience.

“I find it very difficult to relate with the opposite sex after my experience. I lost interest in men as I only got involved with them during my service year. My fiancé was worried at a point because I was not free with him and I had to explain what I went through before we could find a middle ground,” one of them said.

The three ladies, till date, have not told their parents because it has been long and they may not believe them again and while they were young, the threat by the abusers ensured their silence.

According to the United Nations Children’s Fund (UNICEF), six out of 10 children in Nigeria experience emotional, physical or sexual abuse before the age of 18, with half experiencing physical violence. Of the children who reported violence, fewer than five out of a 100 received any form of support.

Studies conducted in Nigeria disclose that young girls are victims in majority of reported assault cases in hospitals. A four-year review of sexual assault cases at the Lagos State University Teaching Hospital (LASUTH) that began in 2008 and ended in December 2012 showed that out of a total 287 reported cases of sexual assault, 83 per cent of the victims were below the age of 19.

A one-year survey conducted at the Enugu State University Teaching Hospital between 2012 and 2013 revealed that 70 per cent of sexual assault victims were under the age of 18. In the Enugu survey, majority of the victims knew their perpetrators and the assault occurred inside uncompleted buildings or residential homes of the perpetrator or the victims.

Most child sexual abuse are by men. About 30 per cent are the child’s relatives; brothers, fathers, uncles or cousins,  while about 60 per cent are other acquaintances such as ‘friends’ of the family, babysitters or neighbours; those molested by strangers are about 10 per cent, the study revealed.

UNICEF reported that there was an increase in reported incidents of sexual violence in north-east Nigeria with 997 cases reported in 2017, compared with 644 in 2016. Those cases included rape, sexual slavery and forced marriage by Boko Haram insurgents.

Women and girls who were abducted, raped and forcibly married in captivity face acute social stigmatisation upon their return because they are often suspected of being sympathizers. Those who return pregnant or with children conceived through rape are frequently rejected or forced to choose between their babies and their families.

The use of abducted women and girls as suicide bombers also increased.  In the prevailing climate of economic desperation, many women and girls have been forced to exchange sex for food or freedom of movement.

The executive-director of a non-government organisation that works for the interest of women youth and children, Gender Relevance Initiative Promotion (GRIP), Rita Ilevbare, told Nigerian Tribune that societal stigma is one major reason some women rapist have refused to speak up.

“When we started this NGO, we came to realise that a lot of women were not confident to tell their stories because the society believes that anyone who speaks of such has soiled the family name. We had to educate and sensitise them; we made them understand that we have a listening ear and they could trust us. After doing all of these, more women began to come out of their shells and tell their stories,” she said.

According to her, a lot of women only speak up to unburden their heart and not to seek legal actions.

She said, “I discovered that a lot of abused women don’t like taking legal actions against their abusers. If seven women speak up, the seven of them are likely to tell you not to take any legal actions. These women just speak up to unburden their heart and only few will take legal actions. The society is not helping matters because they misinterpret these women. Anyone who speaks up is looking for a solution but when the society judges, it adds more to the problem than solution.

“In 2019, we had over 145 cases; that is an average of 13 cases in a month. We have a team of psychologists, counsellors and legal advisers whose job is to help these women recover,” she said.

When asked if the victims she worked with fully recovered, she said: “It is very difficult for these women to fully recover and it takes a long time. Even when they move on, it is an incident that cannot be forgotten.”

The Child Rights Act states that sex with a minor is rape and anyone who has sexual intercourse with a child is liable to imprisonment for life upon conviction.

Another law that deals with rape is the Criminal Code, which is applicable in all southern states. Under the Criminal Code, rape is when any person has sexual intercourse with a woman or girl without her consent, or incorrectly obtained consent. It states that sexual intercourse with underaged girls or people with unsound mind is the offence of defilement, and so technically a person could be charged with rape and defilement.

According to the Penal Code, which is applicable in all the northern states, sex with a girl under 14 years of age or who is of unsound mind is rape, irrespective of whether there is consent.

Rape has psychological effects. According to Dr Olanrewaju Shodeinde, rape affects victims in diverse ways and recovery can only come through therapy and counselling. According to him, “Globally, about 35 per cent of women have experienced one form of sexual harassment or violence or the other. Out of these estimate, less than 40 per cent actually seek medical help while less than 10 per cent seek legal actions. However, there is no accurate statistics about rape as most cases are never reported because of the associated shame and stigma that comes with it.

“There are lots of ways in which rape can affect victims and this can be classified physically, socially, emotionally and mentally. Some of the trauma victims go through are bruises, bleeding, unwanted pregnancy, nightmares, drugs and sex addiction, obsession, increase in heart rate, panic attacks (when they see some appearance that looks like stigmatisation by the society (and this results to psychological damage because they begin to feel worthless) and low self-esteem.

“The best way to make victims recover is through therapy or counselling. As a psychologist, the therapeutic method we use to help victims recover is by giving them the necessary support they need, helping them to think and see the problem in an adaptive way. We help them walk through it by talking about the problem. Also, we encourage them to see the symptoms in a positive way. It may take a lot of time and efforts to recover, but at the end of the day, they get better,” he said.

Psychological help is a necessity for rape victims. This is why various non-governmental organisations are going about sensitising women on the need to speak out and assuring them of support.

According to Rita Ilevbare, the plan is to educate and sensitise women to speak up and know they are not alone.

“Rape victims need to speak up when they are going through emotional trauma. We have a lot of NGOs helping victims. Tell them your story so that you can feel better. People in the society also need to be sensitised to stop misinterpreting and judging victims. This will reduce the psychological damage victims experience,” she said.