In Bauchi, attend ante-natal clinic, get N1,000 per visit 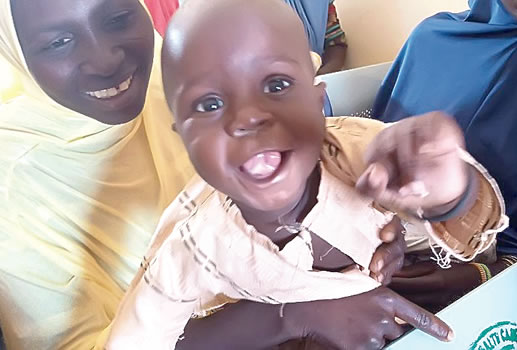 Every pregnant woman who attends ante-natal services gets the sum of N1000 for each visit. She is expected to attend at least four clinics making it N4,000. If she delivers at the facility, she gets additional N4,000 and if she is able to get the complete four doses for the new child, she gets another N4,000. In total, she gets the sum of N12,000.

Call it ‘motivation’ and you are right, that would fit into what EU-UNICEF is doing in Bauchi State through its Social Protection Programme under the Conditional Cash Transfer (CCT) initiative which offers an incentive to pregnant women and nursing mothers and their children.

Checks revealed that the Conditional Cash Transfer (CCT), which is a Social Protection Programme (SPP) is being implemented in three LGAs of the state which are; Bauchi, Katagum and Misau where a pregnant woman is enrolled into ante-natal clinic and given transport fare of N1,000 in each of her recommended four ANC visits; N4,000 when she delivers in the health facility and child receives first immunisation vaccines;  and N1,000 in each of the next 4 immunisation schedules for the child. These amount to a total of N12,000 for one woman from pregnancy stage, through delivery to fully immunised stage of the infant. This strategy is designed to bridge the gap of financial barriers hindering pregnant women in remote communities from attending ANC; delivering in the hospital or fully immunising their children against preventable diseases. Over 3,500 women have benefitted from the scheme in the three supported PHCs.

Our correspondent visited KafinSule in Misau LGA which has a total estimated population of about 16,000 inhabitants and a total of estimated 3,493 women of child bearing age while the total estimated children under five years are 3,175 with 50 settlement who are mostly farmers and cattle rearers, with access to the community is by only motorcycle which takes about two hours ride from Misau, headquarters of the LGA.

All the pregnant women and nursing mothers who spoke in this one of the hard to reach (HTR) communities in Misau Local government area of Bauchi State commended EU-UNICEF initiatives of Conditional Cash Transfer (CCT) under the Social Protection Programme (SPP) appealing for more of such to improve mother and child health while expressing the opinion that the programme has really impacted positively on their health status as well as that of their under 5 children.

UmmiIsah is a 17-years-old nursing mother said when she heard about the program, she quickly embraced it, stressing that she had no regret partaking in it as it has really proved to be a good, “I attended ante-natal four times and each of the visits I got N1000 after the very good care I received from the workers. After delivery I received another sum of N400 as well as N4000 for four visits to get my child immunised. It is indeed a welcome development”.

On her own part, 25-years-old Asabe Hassan, who is carrying her 4th pregnancy, disclosed that, “I have noticed a difference between now that I am coming for ante-natal and the previous years. The workers take good care of me and my unborn child by giving me the sum of N1000 which I use to buy food that will enhance my health and the baby I am carrying”.

Secretary of the community committee for the programme, Baba Yarima who stood in for the Chairman disclosed that since 2017 when the programme was launched in the community not less than the sum of N10m had been disbursed to pregnant women and nursing mothers commending EU-UNICEF for the intervention programme and called for more funds because according to him, “with the acceptance of the programme, more women from neighbouring villages in Giade LGA are now coming to benefit and we cannot deny them because we are all one people.”

In her own contribution, deputy women leader in the community, Daso A. Liman said that the SPP initiative had contributed greatly to the promotion of mother and child health particularly during pregnancy and after delivery. She said that periodically women members of the committee go out for mobilisation and sensitisation in order to educate women on the importance of mother and child health stressing that since 20117 when the programme started in the community, the attitude of women to health issues had changed positively.

The Community Health Officer (CHO) in charge of the facility, Amina Mohammed while commending EU-UNICEF for the initiative however lamented dearth of manpower in the facility which is being overwhelmed by patients and appealed to authority concerned at the LGA level to as a matter of urgency post more health personnel to the facility to complement their efforts.

In Gwasamai, another hard to reach (HTR) village in Katagum LGA, the EU-UNICEF collaborative initiatives had spent over N17m in its Conditional Cash Transfer (CCT) which is a Social Protection Programme (SPP) to pregnant women and nursing mothers aimed at strengthening Primary Health Care (PHC) and Community Resilience for Improved Maternal, New-born, Child Health and Nutrition (MNCH) in the state.

While speaking on the programme during a working visit there by our correspondent, Chairman of the Community Development Committee for the management of the programme, WadauYa’u commended the initiative saying that it has helped in promoting mother and child health in the area adding that the incentive given to the women has increased awareness about family health issues among the people stressing that men who do not have enough money to care for their pregnant wives and Under 5 children have embraced the programme fully.

The community leader then appealed that EU-UNICEF should not end the programme but rather extend and expand it because according to him villages that are currently enjoying the programme are up to twelve.

In her contribution, the women leader in the area, Adama Ibrahim expressed happiness with the programme saying that it has saved the lives of many pregnant women and their children as they were given adequate attention each time they visited the facility and appealed for the continuation and expansion of the programme so that more women will benefit from it thereby promoting family health.

The Community Health Officer (CHO) in charge of the facility, Babaji Kabir disclosed that since the inception of the programme, attendance at ante-natal and post-natal have doubled to the extent that the facility at Gwasamai is becoming over stretched and added that with the support of the community management committee, the program had become well accepted by the people of the area.

In their various responses, some of the beneficiaries, Ummi who is nursing a 4 months old Aisha commended the sponsors of the programme saying that it has helped to keep women and their children alive and healthy while Tabawa Yushau who is carrying her 10th pregnancy said that she had seen a tremendous positive change in her health since embracing the program.

As for six months old pregnant Salamatu Abdullahi whose village is about 3km to the facility, the programme had positively impacted her life saying that since she embraced it, her health status has changed dramatically promising that she would continue to attend the facility for ante-natal until she gives birth.

In Luda village of Bauchi LGA, the story was not different as an estimated figure of about 500,000 women and surrounding villages had so far benefited from the EU-UNICEF Conditional Cash Transfer (CCT) implemented under the Social Protection Programme (SPP) which is aimed at promoting Maternal, Child and New born Health (MCNH) in hard to reach (HTR) villages.

While speaking on the success recorded so far in the programme, Secretary of the management committee of the programme in the area, Danjuma Adamu disclosed that since 2017 when the programme took off, not less than N15m had been disbursed to the beneficiaries who he said come from even neighboring state of Plateau.

Danjuma Adamu who commended EU-UNICEF for the intervention which he opined has impacted positively in scaling up family health in the area appealed for more funds to cater for the increasing number of beneficiaries.

The women leader in the area, Murjanatu Atiku also commended EU-UNICEF for coming to the aid of pregnant women and children in area, saying that the intervention was well embraced by the beneficiaries describing it as a positive impact.

She however called on the state government to ensure continuity of the programme by the time EU-UNICEF ends it because according to her, it had been accepted by the people and only its continuity would be good.

In his brief about the programme, the officer in charge of the Luda PHCC, Bashir Abdullahi, the intervention had tremendous impact on family health in the area, saying that women are now scrambling to attend ante-natal and post-natal clinics knowing that at the end of every visit, they would go back home with a token of N1000.

He pointed out that because of the daily influx of beneficiaries the facility has become grossly inadequate and need to be expanded to contain the number just as he too expressed fear that if EU-UNICEF ends the programme it would negatively affect family health in the area.

As for the mother of nine-months-old Yusuf Abdullahi, Amina Abdullahi, the program is a way of promoting quality family health appealing that the program should not be stopped but rather strengthened to enable it reach many more women in the area.

One thing common is that all of the beneficiaries were however united in appealing that the duration of the programme should be extended so that more women and children will benefit from it.