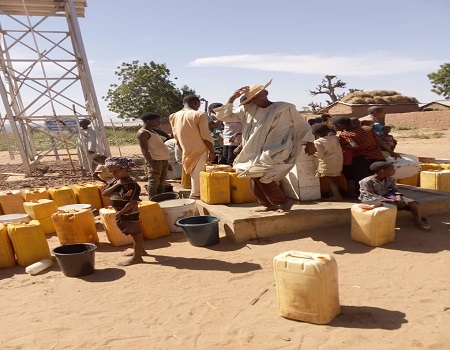 The call was made by Bauchi State chapter of the Water Sanitation and Hygiene (WASH) Media Network declaring that the promotion of WASH issues in the cannot be overemphasised considering its importance to the people.

Secretary of the Network, Malam Ahmed Kaigama made the call at the end of a media community tour of Bauchi Metropolis and Kirfi local Government supported by WaterAid Nigeria implemented by Network Society for Water and Sanitation (NEWSAN) Bauchi state.

He lamented that the lack of access to safe, clean drinking and basic sanitation, as well as poor hygiene cause nearly 90% of all deaths emanating from diarrhoea saying, “Most of our rural communities still defecate in the open, and handwashing with soap is practised, on average,”.

Ahmed Kaigama added that “Diarrhoea, most often results from the ingestion of pathogens from faeces that have not been disposed of properly, or from the lack of hygiene. A person is classified as having diarrhoea when she or he experiences more than three liquid stools per day,”.

He also noted that hygiene education can address a number of negative practices, including non-hand washing after toilet use and before the preparation of food because according to him, “behavioural factors are important in determining the uptake and sustainable adoption of water, sanitation and hygiene practices”.

“While water, sanitation and hygiene interventions are potentially highly efficient, their effectiveness in part depends on behaviour change and context,” Ahmed Kaigama said.

The Network Secretary called on the government to improve rural water supply and create good sanitation environment by providing toilet facilities in public places to discourage people from defecating in open places.

He also urged the citizens to demand the provision of sustainable clean water, because is a right for citizens to make such demands.

Ahmed Kaigama also lamented the indiscriminate dumping of refuse in the metropolis that pose a threat to rampant communicable diseases such as diarrhoea, malaria among others.

He, however, commended the state government efforts in providing dumping site across the state capital and constant evacuation of the refuse and advised that government should step up the sanitation activities and policies to provide a conducive and disease-free environment in the state.

A villager, Mallam Sani Bulakon Gani lamented over the lack of access to water in the community, according to him, “we have only two sources of drinking water well and hand pump which has even stop working”.

He then appealed to the government to come to the aid of the community and provide potable water to save the community from drinking contaminated water.

Yahaya Abubakar Sulaiman of Ganjuwa Community in Bauchi Metropolis commended the present administration for clearing the refuse in the area saying, “Before then this place you see would always field up with heaps of refuse but the present government will every day evacuate the refuse”.

He added that “It was a terrible situation we have been experiencing in this place especially during the rainy season but the authorities are doing their best in terms of evacuating”.

Malam Sulaiman called on the government to provide a lasting solution by providing permanent dumpsite in the community to stop indiscriminate dumping of refuse.

A resident of Doya and community leader, Alhaji Ladan Shuaibu said that the community had been making an effort to evacuate the refuse and also discouraging defecation on the refuse.

“We warn the residents severally to desist from defecating openly and on the heaps of the refuse is harmful to us and the children but people hardly adhere,” he said

Ladan Shuaibu also said that government has promised to evacuate the refuse after the rainy season when the road leading to the dumpsite dries up and appealed to the government to save the situation because the environment is becoming a disease-prone area, it needs urgent attention.

Mrs Hadiza Daniel Usman who is in charge of Kandahar Primary Healthcare Center lamented that the heaps of refuse close to the health facility are affecting the patients and the workers negatively especially when the smell of the refuse was oozing out which is not healthy.

She also complained that the nearby drainage which needs evacuation also affects the health of the people in the community and called on the government to come to the aid of the community by constructing dumpsite and evacuation and clearing of the drainage to pave way healthier environment.

On his part the Overseer of the Bauchi State Environmental Protection Agency (BASEPA) Alhaji Mohammed Abubakar Jarma said that the present administration has done much with regards to sanitation in the state.

According to him, “since the coming of this government, the Governor, Sen Bala Mohammed has kick-started sanitation by evacuation of heaps of refuse in the state capital.

“The governor directed the agency to clear all the refuse dumps in the street of the metropolis and ordered that people should stop dumping refuse indiscriminately. The state government constructs dump site for people dump their refuse for onward evacuation, we start constructing 3 dumpsite which is put to use and another 3 is ongoing”, he added

He then assured, “We are planning to construct  15 concrete dumpsites that can last for over 20 years in the state capital that will provide a healthy environment for the citizens”.

He, however, said that the agency will not relent in its efforts of providing a clean and hygienic environment that is free of communicable diseases in the state.