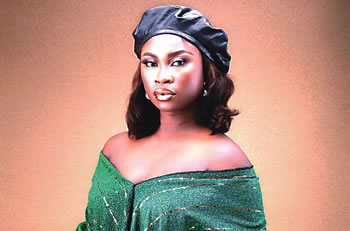 Popular actress Temitope Olaniyi is growing in the movie industry and showing movie lovers that she wants to stay relevant in the make-believe business. With less than five years in the industry, Olaniyi has emerged as one of the most sought after in the Yoruba speaking movies. She shares her journey to fame in this interview with SEGUN ADEBAYO.

You are considered as one of the fast rising actresses in the Nigerian movie industry today. How did your acting journey begin?

Right from childhood, at home, at the church, school and so on, I have always been a mini-drama personality. I acted at home for my family, acted in church drama and participated in school drama, so I have always loved acting but as an adult, I decided to pursue the dream in 2016. I started attending auditions, looking around for acting opportunities and going to locations. I got a few roles scantily between 2016 and 2019. In 2019, I discovered Prodigy Academy, registered and boom! My life is never the same again. So I can say, professionally, my acting career started in 2019.

You are a certified journalist which can be considered as a noble profession; why acting?

Ironically, my first acting role at Prodigy was the role of a journalist. I have always wanted to be a tool of storytelling; conveying messages. A journalist tells stories, conveys messages (factual stories/messages). An actor also tell stories, conveys messages (fictional, sometimes factual) so somehow, I think they are related. I am still going to start a talk show where I will be bringing my journalism/presentation training to the fore. So I’m not leaving one for the other totally.

Getting into the movie industry and attaining the celebrity status is something one can’t escape from; how do you deal with the attractions that come with being an actress?

Well, it is interesting. It’s a sign that people you don’t know are beginning to know you. It is a good feeling and with the training from my film school, I am prepared to deal with that with all humility. I am ready for that default smiles and waves whenever fans do their things.

You are right. This fan relationship took a new turn since the release of the movie Jagbajantis! It is like the whole world has seen that movie. Everywhere I go, everyone hails Galagala, my character in the movie. Some will greet me by mimicking the signature head flipping mannerism of Ms. Galagala. Some will greet me by repeating a dialogue from the movie. I have met a few people who seemed to have memorised all the dialogues in the movie. My fans are remarkable, I love them, soI receive them always with love.

I was calm but I’ve got sweaty palms from anxiety. Although, I managed to control my anxiety the first time. Maybe it would have been a disaster if I was not bred in Imota. I grew up in Imota, Ikorodu, and this was a regular film location for our filmmakers. I had seen a lot of actors while growing up. I had been close to them; they filmed in my neighbourhood, street, compound and even our rooms. I had seen them in the line of duty a lot. This facilitated my confidence. It makes me feel like I’ve known actors, producers and directors all my life. It was almost like I was born in a film village. Equipped with this familiarity and unofficial experience, my first time on set was not disastrous like some star actors today had confessed.

How do you cope with memorising the lines of a movie role given to you?.

That is a natural gift, so I don’t even have issues with memorizing lines. I can memorize dialogues of several pages.

How do you feel when you get calls to be featured on movies?

Another call to duty, that’s how I feel. I just feel like it’s time to go to work

Are there limits to the roles you can play in a movie?

There is always an elastic limit to everything in life. As much as I am passionate about what I do, I have set a standard for myself. I am a family-friendly brand. I always want to interpret a role my teenage fans can watch and relate with. So, as far as teenagers can watch, I don’t have a limit but I will avoid salacious roles, especially where it is unnecessary or avoidable.

Some of your curious male fans out there may want to know if you are single or taken?

Yes, I am very single.

When things don’t go as planned on some days, how do you handle the feelings that come with such days; how do you draw inspiration to keep going?

I reflect on my happy moments, and then ask, what has made me so happy on this day? Sometimes, not being contented is a catalyst to being unhappy and depressed. I am habitually contented and when things don’t go my way, I find a reason to believe God loves me and that the thing is not for me.

Everyone is talking about your significant role in the movie Jagabantis; how were you able to deliver in such difficult character?

My boss, my mentor Abiodun Jimoh said to me “this movie would mark a turnaround in your career, put your best into it” that was all I needed to hear. I got the script, read it over and over then began to discuss the nuances and mannerisms of Ms. Galagala with my boss who is the writer and director. He gave me a very good insight and I took it from there. According to him, Miss Galagala is an energetic and overzealous interpreter who is extremely loyal to her boss, the grammarian. The character of the grammarian was inspired by Patrick Obahiagbon whom when he speaks, you only understand a quarter of what he had said. Not understanding what your lead character in a movie is saying would pose a great difficulty to the audience and this is what gives Ms. Galagala so much power in this movie as she stands as the only solution between Willoughy’s vocabularies and the audience’s confusion. It is an unforgettable character, I love the role and so is everyone who watched the movie.

Where do you envision yourself in the next five years?

Somewhere on the mountain top as a filmmaker, mother, wife, investor and role model. I want to inspire the world. I want mothers to dream that their daughter will be like Anike Ami Olaniyi.

Any personal projects you’re working on?

Oh yes! I will be producing my debut movie titled: ANIKE AMI this month.

What should fans expect from you?

People should expect nothing short of excellence from me. I have decided to make it a duty to produce and be part of excellent productions only, so help me God.