I’m ok, says Buhari on return to Abuja •Our daddy is back – Yari 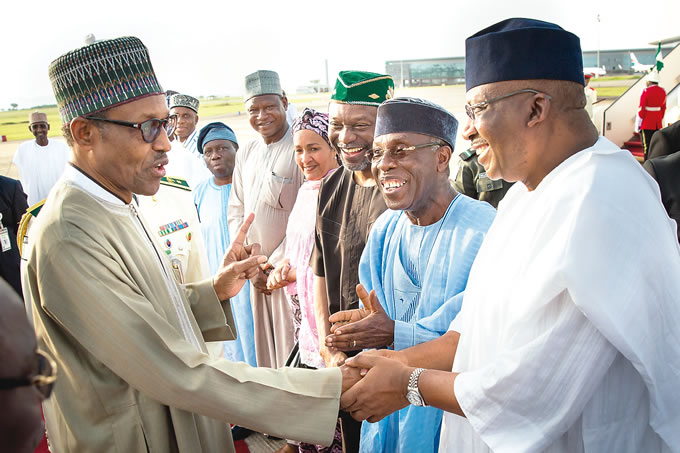 AFTER two weeks’ vacation in the United Kingdom where he undertook medical treatment for an ear infection, President Muhammadu Buhari on Sunday retuned to Abuja.

He declared himself alright in a brief chat with State House correspondents after his inspection of Guard of Honour mounted by Guards Brigade on arrival at the Presidential Wing of the Nnamdi Azikiwe Airport.

The president plane touched down at about 5.34pm into an airport reception led by Zamfara State Governor, Abdulaziz Yari.

With Yari were his Kogi State counterpart, Yahaya Bello; ministers, members of the National Assembly, service chief, among others.

After an inspection of a guard of honour, he was asked about his present state of health and he responded: “You have seen me. You saw me when I was going. You can do the assessment yourself.

“I am okay. You can see me inspecting the guard of honour. You can see I am taller than you. Do you want to wrestle with me? You can do so,” he said before leaving for the Presidential Villa, Abuja soon immediately.

He said: “We thank God for bringing him back to the country. It is a good thing he went on break and returned to his people hale and hearty.

“Our daddy is back. He has gone to take a rest we are happy that he is back.”

The Special Adviser to the president on media and publicity, Femi Adesina, in his remark, reiterated that the president was fit and would resume work on Monday.

“Mr President is fit and will resume work on Monday,” Adesina declared.