I’m both an Ifa priest and Oba, one shouldn’t hinder the other —Olu Ibogun 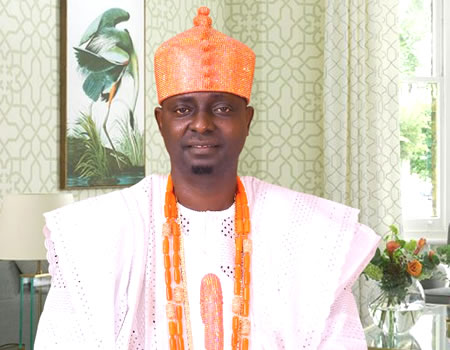 In this interview by BAYO ALADE, the Olu Ibogun Balogun, Owu Kingdom, Ogun State, Oba Fakayode Adesina Faluade speaks on his dual role of being a traditional ruler and Ifa priest, while revealing the activities surrounding his second coronation anniversary including the successes recorded so far in the development of the town.

Can you let us into your background, Kabiyesi

I am Oba (Dr.) Fákáyodé Adésìná Fálùádé Aníkinníkùn, the Olú of Ìbògùn Balógun, Òwu Kingdom. I am from Alébíosù compound of Abeòkúta, Ogun State. I was born and bred in Sango Ota. I attended O.D.C Primary School, Sango Ota; Ansar-ud-deen Grammar School O ta and Nawar-ud-deen Grammar School, Sholu, Ifo, Ogun State, where I completed my secondary school education. I am currently studying Linguistics and African and Asian Studies at the University of Lagos. Aside being an oba, I am a practising Ifá Priest. I am married, with children.

Power could intoxicate some people. How have you been able to remain humble since you became a traditional ruler?

Olódùmarè is the only one who accords the heart the act of humility. In addition, one cannot have a full knowledge of Ifá and be proud. You will learn the advantages of being humble by studying Ifá because all the chapters and verses emphasise humility and frowns on ego.

There is nothing in pride and ego. It is Elédùmarè, alongside the destiny of man that makes one great. In summary, it is all about the knowledge of Ifá, and I am indebted to Olódùmarè for setting my feet on this great path.

You are a practising Ifa priest and a traditional ruler. How do you combine the two?

Yes, I am still a practising Ifá Priest. Being an oba does not prevent me from my role as a priest of Ifa. Besides, I am not the first Ifá Priest to be a crowned an oba. It all started from ̀̀Orúnmìlà the author of Ifá. In Ìwòrì méjì, an Ifá chapter, when ̀̀Orúnmìlà was crowned as the oba of Adó-Ewí, Ò̀rúnmìlà did not neglect the practice of Ifá due to his new role as a crowned oba. He continued with the salvation of humankind.

Therefore, being an oba does not prevent me from practising Ifá. I still attend to people as usual, saving souls, losing bondages and offering helping hands.

Did you study Ifa under somebody or it is a family thing?

(Smiles) Both. My knowledge of Ifá is a family heritage, and I sought more knowledge by learning from three different masters besides the knowledge I acquired from my father and grandfather. My father and grandfather were Ifá Priests. I improved on my knowledge of Ifá from Pa Alàní Fátunbí, Alárámookì of Egbá land. I also learned for some years from Olúwo Adésùmbo in Òláògun, as well as from Chief Pekun Ìkèrèkú. Learning Ifá for a number of years was what prevented me from furthering my education earlier, but now that I am satisfied with my pace in Ifá, I have returned to continue my formal education.

Do you have any challenges combining both roles of oba and Ifa priest?

Yes, there are several challenges, but one has to find a balance, for which I give accolades to Olódùmarè.

Do you mind sharing some of these challenges with us?

Being an oba has its own challenges. Ifá practices have many challenges. Bringing the two together in itself is challenging, but with Elédùmarè one is able to surmount the challenges.

It is general knowledge that many spiritual battles come with saving lives, losing bondages and breaking yokes. Olódùmarè has been our might and strength. I do not attribute the blessings of either to myself, but to the Almighty Elédùmarè. Àkosejaye predicted my becoming an Ifá Priest. Being a crowned oba was also the special grace of Elédùmarè, who has been, and is always my refuge and fortress when the battles get tough.

On December 8, this year, you will be celebrating your second anniversary on the throne. Can you tell us the achievements so far recorded in your domain – Ibogun Balogun?

Yes, we have the grand finale of the second year coronation anniversary slated for December 8, 2019. The events will actually commence on November 24 with Olokun Day, and end with a church thanksgiving on December 15, 2019.

Ideally, the anniversary should have been in February 2019, because the approval for my coronation was in February 2016, but due to the fact that there was no palace in place, I decided to postpone it to December 2016 after building a palace with the help of Elédùmarè and well-wishers.

The second anniversary is a thanksgiving to Elédùmarè. Irrespective of the religion, any anniversary on earth is a form of thanksgiving to Elédùmarè. According to Ifá, the word ‘Oodunrun Ojo” now called “̀̀Odún” in Yoruba, means 300 days. Festivals originated from ̀Orúnmìlà, and it is done every 300 days with the purpose of giving thanks to Elédùmare, as well as to request for the grace to witness another 300 days. Festivals are important; and they must always be marked irrespective of the size or age.

Our achievements within the last two years in Ibogun area are: Two free eye screening tests and treatments, which included cataract surgical and glaucoma services; construction and provision of modern toilets and facilities for students and staff of Baptist Primary School, Ò̀láògun; provision of an electricity transformer for Ìbògùn Balógun community.

Others are construction of modern market stalls for Fufu sellers at  Ojá Agbómábiwón Market, Ìbògùn; laying the foundation stone of a secondary school in Ìbògùn, which we named Ìbògùn Millennium Grammar School; scholarship programmes for outstanding indigent students of Ìbògùn; commencement of the perimeter survey and layout of Ìbògùn Balogun lands; layout of Oba Fákáyodé Fálùádé Estate, where interested parties can procure land at affordable rates.

We are also planning the foundation laying for Ìbògùn Balogun Mosque, as well as a health centre during the week of the second anniversary.

What are the future plans that you have for Ibogun Balogun and are there any opportunities for investors?

I want Elédùmarè to turn my territory to a small London. The essence of the perimeter survey is for Ìbògùn to attract investors who will improve the economy of the area. Perimeter survey ensures a town is well-structured, and the appropriate designations for each establishment, (companies, schools, factories, residence, etc.) will be defined.

As pointed out, we have provided electricity in the area, which is an improvement in the land. When there is stable electricity, investors would be encouraged, because they know they will be spending less on diesel to run their companies.

As it is general knowledge that Ifá́ is our traditional heritage, so is royalty. Every town and community has its own heritage, which the traditional rulers must take seriously to avoid them going into extinction.

There are many misconceptions about Ifá́ being evil. It is a fallacy. If one is knowledgeable about Ifá́, one will know its value and greatness. Ifá is the voice of Olódùmarè and serves as our guidance in life. It is really worthy of celebration.

The essence of Ifá Olókun Festival is to appreciate Olódùmarè for the word (Ifá) which He gave to humankind. This is not our first celebration. It has been our tradition for ages.

However, it will be the 19th year since we started celebrating it under the umbrella of Ifá́ Olókun Foundation. The foundation’s governing body comprises reputable board of trustees.

In today’s world, there are various ways of serving Elédùmarè, but we can do it in our own special way (tiwa ntiwa). Our traditional heritage must be highly rated. I have told you that being an Ifa practitioner has not prevented me from participating in activities of other religions. I am an oba, and you know, an oba belongs to every religion practised in his domain.

To buttress this, we are closing the ceremonies by celebrating with, and recognising our Muslim and Christian families with a Jumat Service at Ibogun Central Mosque, Ikatedo on December 13, 2019 by 1pm; and a thanksgiving service at the First Baptist Church, Ibogun Olaogun on December 15, 2019 at 10 am.

Above all, this is not the first of its kind; it has been our practice and will always be by the power of our leader, Ò̀rúnmìlà.

As I have said before, Ifa is misconceived. My grandfather cannot be on a wrong path and still set the feet of my father on that path. My father cannot see what is wrong and allow me to go into it. Though the acts and practices of some Ifá practitioners today is not representative of what Ifá is about, but this is not peculiar to the practice of Ifá. It is what cuts across every religion.

Look, it is only the Heavens that know the people serving in truth. My advice for us is that we should be pure in any religion we are practising, but our culture and traditional heritages must be very important to us.

The farmer and the well