President Muhammadu Buhari has said that he was aware of the devastation poverty was causing in Nigerian families, hence, his administration pursuit of various programmes to ameliorate it.

Speaking on Thursday at the Joint National Conference of Nigerian Supreme Council for Islamic Affairs (NSCIA) and Future Assured Initiative on Repositioning the Muslim Family for National Development, organised at the presidential villa, Abuja, Buhari observed that while some of the programmes have a direct impact on the families, others have indirect impacts. 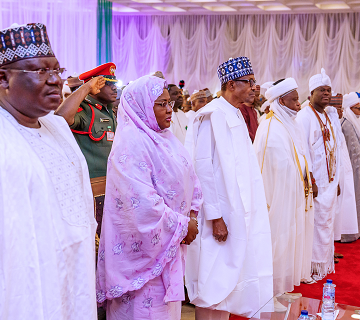 He said: “We have been conscious of the havoc poverty is wreaking on the family. We, therefore, believe that poverty alleviation is central to safeguarding the integrity of our families. 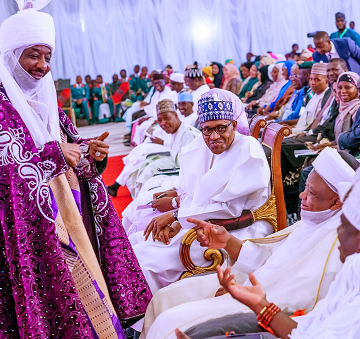 ALSO READ: Buhari will not resign over insecurity ― Lai Mohammed

“Our administration introduced a number of economic empowerment and poverty alleviation schemes. Some of these directly impact on families while others have indirect effect on families through their multiplier effects.

“The first, and most robust programme, is the Social Investment Programme, which serves as a very broad framework for availing Nigerian families at the grassroots level different forms of economic support.”

According to the President, many homes had benefitted from the Conditional Cash Transfer, while trader-moni and market-moni schemes have also been impactful.

“The school feeding programme has assisted immensely in supporting poor Nigerian families in getting their children enrolled and sustained in school,’’ he said.

Buhari advised Christian and Muslim leaders, and preachers generally, in the country to give more attention to issues that strengthen the family and build the society, describing them as “custodians of our values and of social ideals’.’

He noted that the family provided the bedrock for any society, and deserved more attention in Nigeria.

Buhari stressed: “In this endeavour, our religious leaders and organisations are most important catalyst. They are the custodians of our values and of our social ideals. It is, therefore, commendable that the Nigerian Supreme Council in collaboration with the Future Assured Initiative has risen up to this challenge.

“I, however, wish to call on all our religious leaders and organizations, both Christian and Muslim, to follow suit by redirecting important elements of their preaching and teachings on family issues with a view to broadening the sensitization of people at the grassroots level,’’ he said.

The President said the government would also put more effort into ensuring economic support, and empowering of family members for more stability.

On flagging-off of marriage counselling projects across the country, Buhari noted that the search for national rebirth, efforts at fighting corruption, indiscipline and struggle for attitudinal change must all begin from the family unit.

“While we appreciate the significant role of the mass media and other public enlightenment channels and outfits in propagating and promoting positive values, we just have to acknowledge the fact that all these build, after all, upon the foundations that must have been laid down at home,’’ he said.

President Buhari commended His Eminence, Sultan of Sokoto, Sultan Muhammadu Sa’ad Abubakar and Future Assured Initiative, under the leadership of Her Excellency, the First Lady, Hajiya Aisha Buhari, for the projects on marriage and family.

In her remarks, the First Lady said the project will identify critical marriage challenges and suggest relevant instruments for addressing them, which include sensitising relevant stakeholders on their responsibilities.

“We have succeeded in assembling an array of Islamic scholars to further deliberate on these matters, with the belief that they will do justice to the issues,’’ she added.

The Senate President, Ahmad Ibrahim Lawan, said the Universal Basic Education should be fully implemented to compel parents to send their children to school, assuring that the National Assembly will work with the Executive to ensure compliance.

In his keynote address, His Highness, Emir of Kano, Muhammadu Sanusi II, admonished men to take full responsibility for their marriages, especially in economic terms, by marrying only when they can take care of a wife, and having children they can cater for.

He called for enactment of laws by state governments to tackle injustices in marriages just as he recommended the arrest of any parent that sends out his child as an Almajiri to beg for alms.

Sanusi was of the view that no law provides that a man should marry, have children and abandon his responsibility to them.

He said any man that was too poor to take care of his family should go out and beg himself and not send his child.

The traditional ruler called for the arrest of any parent that turned his child or ward to an Almajiri rather than arresting the boy.

The Emir added: “Every day, wives are complaining about their husbands, who claim their rights but abandon their responsibilities of marriage, women being divorced with their husbands not taking care of the children and those children ending up on the streets, drugs, political thuggery, violent extremism.”

He said while most of the northern states adopted sharia law, they neglected to codify laws that ensure justice in the family.

The royal father stated: “No law that talks about consent in marriage, the rights of wives and husbands, domestic violence, rights of women divorced, the responsibilities of husbands under divorce situations, if a child is found on the streets, is the father that is responsible and can the state hold him accountable?

“These are Sharia and they are all more important than cutting off the hand of a thief.”

He announced that after several months of thorough work, himself and the Sultan of Sokoto, Alhaji Saad Abubakar, have successfully packaged a set of laws to address some of the issues, to Governor Ibrahim Ganduje of Kano state for onward transmission to the State House of Assembly for consideration and passage into law.

“Is it a fact that a father has the right to force his daughter into a loveless marriage? That you have the rights to batter you wife? You have the right to have children and push them to the streets to beg? That when you divorce your wife, you ask her and her children to pack and go back to her father’s house and that is the end?”

He said even though he may talk about it, only the state governors have the powers to enact the laws.

“It is only the governors who can pass the laws to say that when a man divorces his wife, it is his responsibilities to provide for the children, it is the Courts and Security system that will enforce,” he said.

The Sultan of Sokoto, in his address, admonished that the government and the courts would answer to Allah for refusing to grant justice.

“We are not short of recommendations and resolutions. What we lack is implementation,” he said, while urging  Buhari to give marching orders to the governors to implement resolutions reached at the conference.

The Ooni of Ife, Oba Adeyeye Enitan Ogunwiusi, also spoke at the occasion, stressing the need for immediate action on the Almajiri menace.