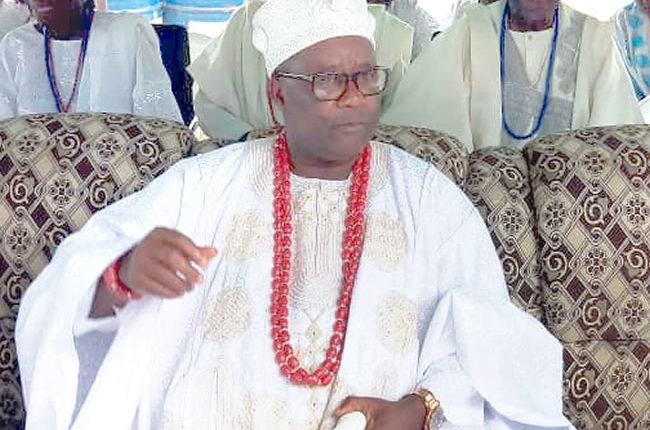 The Are of Ago-Are, Oba Abodunrin Kofoworola is in ecstatic mood following the recent location of 72 Mobile Police Force Squadron Base in his town, which is also the headquarters of Atisbo South Local Council Development Area of Oyo State. In this interview by TUNDE BUSARI, the former Director of Administration in the Nigerian Educational Research and Development Council (NERDC) says future of Ago-Are offers much promise to him and his subjects. Excerpts:

You must have lobbied to get the Mobile Police Force 72 Squadron sited in your town among many other towns in Oke-Ogun in particular and Oyo State in general.

Let me tell you that it is the work of God. The decision to site 72 Mobile Squadron in Ago-Are was not taken in my presence. Look, human beings have many things to learn on how God does His work without consulting us. If we can learn this simple lesson, we will realise that we don’t really need all the running around and the pushing and competitions. If there is anybody I should compete with, that person is myself. I compete with myself, not with another person, in order to make myself better that I was. What I am saying is that the issue is beyond lobby. It is about suitability which the authorities represented by our Governor, Engineer Seyi Makinde, discovered and acted upon.

Are you saying you were surprised by the announcement?

What you have no pre-knowledge of must surprise you. I am using this opportunity to thank Governor Seyi Makinde for considering Ago-Are for the Squadron.

How prepared are you?

We are fully prepared. If not for this coronavirus pandemic which caught everybody unawares, construction work would have started and possibly near completion. Governor Makinde had promised and had set a time frame of six months to complete it. But the pandemic and its cost on running of government has slowed the work down. I am sure that as soon as the coast is clear finally, work will resume and the project will be completed. They have cleared the site already on Okaka road. The location is conspicuous for all travellers from Iseyin through Ago-Are to Saki to see. We are very optimistic that the work will resume.

You mentioned suitability as a factor considered to site the project here. Can you speak more on this because other places can also claim to be even more suitable?

In as much as I cannot contrast the decision of the authorities, I think this issue should be allowed to rest. However, all those who are familiar with the geography of Oke-Ogun would always give credit to the government for the decision. Let us remove sentiment from it,Ago-Are is most strategically located in terms of security matter in the axis. Again, there is no need to go into details of past experiences. So, we need to thank God for this project. As I speak to you now, the presence of the squadron is already having effect in security situation between farmers and herdsmen. They have realised the meaning of having such unit around them. And I must tell you that I am very happy for this development coming when the squadron has not even taken off. What it means is that we are going to enjoy permanent relief from incessant attacks and clashes of the past. Apart from that, property owners in the town are gradually feeling the effect, meaning that economic activities will be remarkably boosted whenever construction works resume. No traditional ruler would be averse to development and growth of his town. Before we came to the throne, one important question was on our vision for the town.

Then you see yourself as fortunate for achieving two big projects within four years on the throne?

You can say that again. Not everybody got that, and I am thankful to God. I have said it that whatever God approves will always come like this. And I am assuring you that God has not even started with us in this town. Ago-Are is a town of destiny, and that destiny will manifest more during my reign.

Last Monday, you were in Abuja alongside other traditional rulers from Oke-Ogun for public hearing on the propose University of Agriculture in your axis. Do you still expect the university sited in Ago-Are?

(Laughing) There is nothing God cannot and will not do. I think I have said this earlier. But I must be considerate while seeking development and growth of my town. We have 10 local government councils in Oke-Ogun, we all desire even distribution of development. Looking at it from this perspective, you will understand why it won’t be fair to want to have it all. But wherever the university is sited is still part of Oke-Ogun, which means our children will access higher education easily now. They would no longer need to go far for university education.

What was your impression during the public hearing at the national assembly, especially during meeting with the senate president?

We made a good presentation, which the senate president was attentive. He listened and appeared convinced. We extend our appreciation to him too.

You sound too appreciative. Does that suggest applied fear of a change of mind by the government?

No. Naturally, an average Oke-Ogun person would want to show gratitude to you for any good done. We are naturally humble but at the same time firm when we have reason to be so. We cannot be taken for granted. We won’t accept it. We are only appreciating the government in line with adage which says that one who appreciates past gesture will receive more and more.

The allegation has been rife that Oke-Ogun has long suffered marginalisation in Oyo State. To what extent is the allegation faulty?

Who says it is allegation? It is not allegation but the truth which everybody can see. I have said it earlier that we have 10 local government councils here in Oke-Ogun. You should calculate what that number translates to in terms of votes during elections. According to the 2006 population census, we are six millions. What does that mean to you? But despite our numerical strength, there is nothing to show for it, in terms of development. We are a people who value loyalty. If we are following you, you don’t need to look back because it is a waste of time to look back. We are behind you. But instead of compensating this loyalty, reverse is the case. That is why we are all happy for attention being given to us now. We are happy and we shall continue to appreciate the government for now deeming it fit to extend development to us.

I learnt that you have Iluku hill in Ago-Are. What is the significance of the hill to the town?

All things being equal, Iluku hill is going to be developed since tourism sector is now driving economies of nations more than before. The significance of Iluku hill is that it was our first settlement on our way from Ikole-Ekiti in Ekiti State.

You are first Ikole before being Ago-Are.

We originally migrated from Ile-Ife to Ikole after which we settled at Iluku hill. Our forefathers migrated from Ile-Ife to Ikole and later to Iluku hill, which was a natural frontier against attacks from Dahomey flank. There are caves in the hill inside which people took refuge during Dahomey war. My people are doing their best in their own way to explore this natural resource, only that they are small scale farmers. I call on government and investors from outside to come and tap into these resources. We are wealth-creating people. Ago-Are is economic hub to other communities. Government and investors can improve upon this. That is the reason I am happy for the new development of the police unit. When development is brought to people of this area, there is no need to go and congest places like Ibadan, Lagos, Abuja and others.

What is your take on public display of affection?