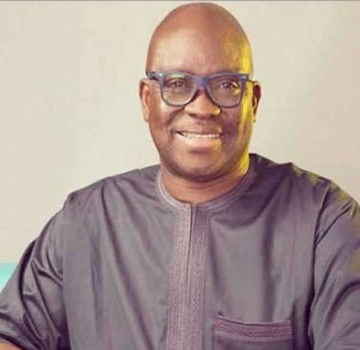 THE Ekiti State government has announced surprise at the protests in Ikere community over its plan to remove a tree in the way of a road construction and said the action of the Olukere and the people was uncalled for.

Governor Ayodele Fayose, who expressed dismay while speaking on a live programme in the state, also announced that the state government paid N1 million to the Olukere of Ikere-Ekiti, Ganiyu Obasoyin, for the relocation of shrines on the site of dualisation of the Ado-Ikere-Akure road.

Fayose, at the programme tagged “Meet Your Governor”, held on Tuesday night, said ‎it was unfortunate that some community leaders and youths were trying to frustrate government’s efforts at developing the town and making life better for the people.

He said: ‎”It is my pleasure that we progress and our society becoming better.‎ In my first term, I started the dualisation and the project stopped where I left it and we started again when I came back to office. We decided to do the project in three phases and we are on the third phase. When we started, we met the Ogoga of Ikere, Oba Jimi Adu Alagbado, who said there were shrines along the project site for us to handle.

‎”Later, the Olukere came into the scene and said the affected area is his domain and that the issue of relocating the shrines did not concern Ogoga. I told him that we might not be able to bend the road. Prominent Ikere indigenes such as former governor of the old Ondo State, Chief Bamidele Olumilua, were at the meeting.

“To help in performing the necessary rituals to relocate the shrines, the Olukere was given N1million on January 11, 2017 to relocate the deities and shrines. He collected the money at the Government House, Ado-Ekiti and the vouchers he signed are still available. In as much as we have respect for traditional institutions, it was a surprise to see the Olukere leading irate youths to stop contractors from doing their job. I want to appeal to the Olukere to allow peace to reign,” he said.

Relocation of Igbos: ACF calls for caution over unguarded utterances